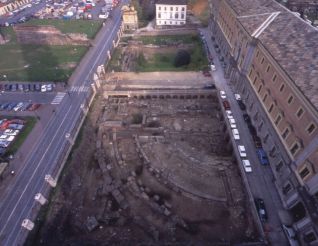 Roman Theatre in Turin (Teatro romano di Torino) is an important testament to the culture of the ancient Roman city of Augusta Taurinorum. The ruins of the ancient theater located in the center of the city are included in the archaeological site, the excavations in which are still being conducted. These ruins of the Roman period are part of the complex of the Museum of Antiquity, and this is a part of the valuable history of mankind.

History of the theatre

The building of the theater has always occupied a central place in the ancient Roman city. And after the beginning of the construction of the large village Augusta Taurinorum and its transformation into a city, the question arose about creating a cultural center. Construction began in 13 BC, and ended at the dawn of a new era. Initially, the theater had a stage, several rows of seats and a fence, all these structures were wooden. It was placed near the city gates of Palatine, in order to provide access to the residents of the surrounding area who came to the village. In 40-50 AD, the stage was transformed, a quadrangular stone portico was added. And by the end of the 1st century the building of the theater had expanded and became completely made out of stone, which was promoted by the economic prosperity of the city. At that time it accommodated about 3000 spectators.

After the arrival of Christianity and the ban on theater performances, the amphitheater fell into decay, and at the end of the 4th century a cathedral of Christ the Savior was built in its place.

The theater has sunk into oblivion, from which it emerged relatively recently. In 1899, during the construction of the new wing of the Royal Palace, the remains of the walls were discovered. Thanks to the assistance of the architect Alfredo D'Andrade, the construction plan was revised in favor of preserving and further studying the ruins of the theater.

The first restoration work was completed in 1911. In 1960-1962, another fundamental excavation took place, during which two characteristic phases of the construction of the theater were discovered. After that, the walls, porticoes and aisles were properly restored.

The theater was located in the northern part of the medieval city, near the city forum, surrounded by houses of wealthy patricians. During the excavations, a street was found that separated the walls of the theater from the dwellings of the townspeople. The theater is structurally very similar to the ancient Augusta Raurica in Basel. It had a semicircular shape with a diameter of 70 meters, with 4 sectors separated by radial staircases. The stage had a length of 44 and a depth of 6 meters.

Today the theater occupies part of the cellars of the wing of the Royal Palace, another part of the excavation (76 meters long) opens onto a street near the Turin Cathedral. From the street you can clearly see part of the walls supporting the seats for spectators, as well as the base of the stage and the straight wall that used to support the roof.

The ruins of the Roman Theater in Turin are located in the historic center of the city, on Via XX Settembre, 88. There are many attractions of the city, including the Palazzo Chiabese and the Diocesan Museum nearby. Near the archaeological zone there is a public transport stop Duomo/Musei Reali. Trams № 4, 7, and buses № 11, 19, 27, 51, 57, 92, N04 run to it.

Admission: you can see the excavations of the theater only during a visit to the Museum of Antiquities. The ticket to the museum costs 12 euros, with a discount (students of EU countries from 18-25) – 6 euros. For children under 18 – admission is free. It is also free to visit the excavation area on the first Sunday of the month.