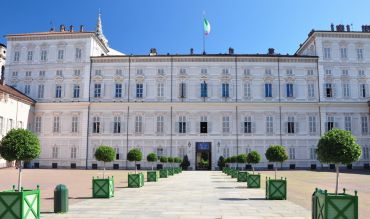 Royal Palace in Turin (Palazzo Reale) has been the most important of the 13 residences of the Savoy dynasty for almost three centuries. It was here that the kings ruled and rested and the princes were born. Outwardly quite simple and strict, the palazzo inside corresponds to its high status, impressing the visitor with the luxury and magnificence of the interiors. This is one of the most important sights of the city, it is also listed as a UNESCO World Heritage Site.

In 1563, Turin became the capital of the duchy of Savoy. The ruler, Emanuele Filiberto, settled in the Episcopal Palace. But already in 1584, together with the construction of the neighboring Piazza Castello, the architect Ascanio Vittozzi was commissioned for the erection of a new palazzo for the ruling dynasty. Later, Amedeo di Castellamonte continued works on the erection of the palace, hired by Queen Regent Maria Christina in 1643. He built the central part of the building. And finally the architect Carlo Morello completed the project in 1658. His project added two towering side wings to the main body. At the end of the 17th century, Guarino Guarini built a chapel next to the palace for the storage of the Shroud of Turin. Already in 1722 another famous architect, Filippo Juvarra, reconstructed the palace a little.

Initially, the residence was called the Ducal Palace, later it acquired its present name. Over the next 150 years famous royal architects were invited for the restoration of the Royal Palace, among them Benedetto Alfieri and Pelagio Palagi. It should be noted that all the work were held in honor of the weddings and the arrival of the new monarch on the throne. In 1799-1815, during the Napoleonic occupation, the residence was moved to the estate in the city of Cagliari. After the unification of Italy, the palace still remained the residence of the king until 1865. Then the capital was moved to Florence, accordingly the ruler moved to the Pitti Palace, and the residence in Turin was used during visits to the city.

After the fall of the monarchy in 1946, the palace was handed over to the state. After that, it was closed and a long and drastic reconstruction took place. It ended in 2007, and the palazzo was opened to visitors as a museum. In 2016 it entered the network of Royal museums.

The architectural style of the building can be traced according to the authors who created the palace. It mixed Baroque, Rococo and Neoclassicism. A strict and simple façade, characteristic of the Turin Baroque, is observed here. The main building has a length of 107 meters and a height of about 30 meters. It is certainly the most famous and is the face of the palazzo.

The symmetrical side wings slightly rise above the main building. They are adjoined by several more parts of the palace, forming a single complex. In front of the white façade there is a small gate with statues of two horsemen. Huge Piazza Castello extends further. Behind the palace building the French landscape architect André Le Nôtre created the Royal Gardens in the late 17th century. This is a typical example of a European noble park of the time, with many statues, beautiful fountains and neat vegetation.

The interior of the monarch's estate is very luxurious. A lot of famous Italian artists and designers worked on its design for centuries. Among them: Isidoro Bianchi, Francesco de Mura, Angelo Maria Crivelli, Pietro Piffetti. On the first, noble floor, everything is aimed at emphasizing the importance and power of the royal dynasty. Here we can single out several rooms: an elegant Chinese salon, a magnificent gallery of authorship of Daniel Seiter, an oval throne room and a ballroom. The last two are made of marble.

On the second floor of the Palazzo Reale there is one of the greatest creations of Filippo Juvarra – a monumental marble staircase called "delle Forbici". It is spiral and designed so that the weight of a noble stone does not destroy the wooden floor of the first floor. Here there are apartments created for the royal couple and separate rooms for children. The pathos of luxury in them is replaced by the peaceful and tranquil atmosphere of the royal chambers, yet they are not devoid of wealth.

One feature that is characteristic of absolutely all spaces of the residence: this is splendor of the decoration. All the halls are full of paintings and frescoes. Vaults support powerful marble columns, between walls and ceilings there are many different bas-reliefs. Huge expensive chandeliers hang from the ceiling. Rooms are equipped with a lot of antique collection furniture, statues, sculptures and statuettes. With gGold and soft light. Chic and shine. And nowadays everyone can visit it, marveling at the rich life of monarchs. Regular excursions are held inside the royal chambers there.

Admission: the cost of the full ticket is 12 euros, with a discount (students of EU countries from 18 to 25) – 6 euros. For those under the age of 18 – admission is free. Also every first Sunday of the month there is free admission. Information of May 2018.