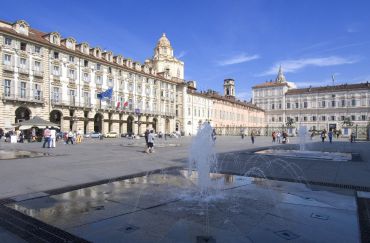 Castle Square of Turin (Piazza Castello) has been the center of the city for many centuries. Historical, political, and any other! Life pulsates here, many of the key city buildings, that are the main tourist attractions of Turin are located here. This is literally the heart of the big city, that is the meeting place for townspeople and tourists.

History of the square

At the beginning of our era, in the 1st century, on the site of the present square there was the eastern gate of the Roman city Augusta Taurinorum, called Porta Praetoria (or Porta Decumana). After the fall of the Roman Empire, a medieval castle was built in their place, protecting the city from barbarian raids. In the late 13th century, the castle became the home of the aristocratic family Savoia-Acaja, the younger branch of the ruling line. Then the nobles demolished the city blocks adjacent to the castle in order to make room for the celebration of dynastic events. Everything changed in the 16th century, when Turin became the capital of Savoy. The kings decided to create a majestic square.

In 1583 the architect Ascanio Vittozzi started the project, having built the western part of the square and the buildings on it. After his death in 1615 the construction was continued by another great architect, Carlo di Castellamonte, and then his son, Amedeo. They completed the southern and northern parts of the forum. In the middle of the 17th century, the future Royal Palace in the north of the square was already under construction. In 1716-1733 Filippo Juvarra worked on some buildings of the square, and in 1738-1741 the eastern part of the square was finally completed by Benedetto Alfieri.

During the 19th century, several buildings appeared on the square. At the beginning of the 20th century, the paving stones were replaced because of the appearance of cars, and tramway rails appeared. In 1997, the western and northern parts of the square became pedestrian, and in 1999 it was covered with a Luserna stone. In 2004, during the preparation for the Winter Olympics in Turin, an excellent street lighting system was created here. And in 2014 the covering of the pedestrian part of the square was again replaced, this time for syenite.

Places of interest on Piazza Castello

The huge forum has a square shape, its territory occupies 40,000 square meters. In size it is the second in the city, only the Piazza ​​Vittorio Veneto is bigger. On three sides it is surrounded by porticoes that are famous and characteristic for Turin. Nowadays, there are numerous cafes, restaurants and retail outlets in these arcades. 4 main streets of Turin lead from the square: Via Po, Via Pietro Micca, Via Roma and Via Garibaldi. The latter is one of the longest pedestrian streets in Europe. The square is surrounded on all sides by historical buildings from different eras, however, almost all of them observe the characteristic Baroque style of the city. Among them we can distinguish:

In the center of the square, around the Palazzo Madama, there are several monuments dedicated in one way or another to the military: a Monument of the Sardinian army, a monument of Italian cavalry, and a monument to Emanuele Filiberto, the Duke of Aosta.

Events on the square

In the past the square was mainly the place of various events dedicated to the ruling dynasty, but with the abolition of the monarchy and the formation of the republic a lot has changed. Now it is used for numerous musical concerts of the most famous performers. In 2012, MTV Days concerts were held here. And during the Winter Olympics in 2006, the square became the place of awarding athletes.

The most famous event on the square is the Bonfire of San Giovanni, which is lit right in the middle of the forum. It gathers many citizens on June 23, the day of the patron of the city, John the Baptist. According to the legend, if the flame moves towards the station of Porta Nuova, that is to the south, then the year will be safe for the city, and vice versa. And if you take into account mysticism and esotericism, many people think that in Turin there are apexes of triangles of black and white magic. And if the Square Piazza Statuto is the apex of a black triangle, then Piazza Castello is the top of the white triangle and the white heart of Turin.