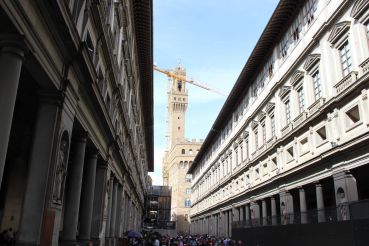 The Uffizi Gallery (Galleria degli Uffizi) occupies two floors of a large 16th-century building in Florence. Offering to the attention of its guests voluminous collections of paintings and sculptures, the museum is known not only in Italy, but also far beyond its borders. The exhibits cover the period from the Middle Ages to the present time and attract lovers of art from all over the world. The collection comprises both the originals and copies of the lost masterpieces created by famous painters.

Collections of the Uffizi Gallery

The building housing the gallery can itself be considered an exhibit. Ancient staircases, sophisticated arches and columns won't leave connoisseurs of architecture indifferent. The exhibits of the museum are numerous and diverse. Among them are:

The construction of the building that now houses the Uffizi Gallery began in 1560 and was commissioned by the Duke of Tuscany Cosimo I of the Medici. The edifice designed by Giorgio Vasari was meant to accommodate administrative and judicial authorities of Florence.

In March 1565, the year of the wedding of Francesco I and Joanna of Austria, a passage was built between the Uffizi and Palazzo Pitti, which was used by a court for three centuries.

Thanks to Francesco I the first exhibition was held there. The top floor housed a collection of ancient statues and busts. In 1588, the Medici Theatre was opened in the eastern wing of the Uffizi.

In 1587, Ferdinand I, brother of Francesco I, transferred a collection of portraits of famous men by Cristofano del Altissimo from Palazzo Vecchio to the gallery. He also fostered the opening of new departments, such as one hosting a collection of armor and weapons.

Later, the ceiling of the museum was decorated with frescoes while its collections were replenished and expanded. Thus, the building became a gallery.

The Galleria Degli Uffizi stop locates near the gallery and can be reached by the bus C1. There is another stop, Ponte Vecchio, on the other side of the museum. You can get there by the buses C3 and D.

Opening hours: the gallery is open to visitors from Tuesday to Sunday from 8:15 to 18:50.

Entrance ticket costs 20 euros, and 12 euros in winter. The information is of June 2018.