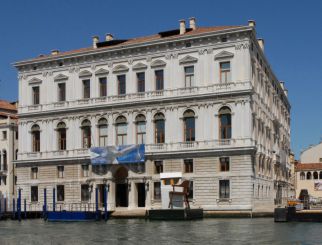 Palazzo Grassi is one of Venice's youngest palaces, an 18th century building located on the Grand Canal, among the intertwined streets of the city. Now it is a large European exhibition complex, where Francois Pinault's collections are exhibited, as well as international exhibitions are held. The large three-story building attracts the attention of tourists and townspeople not only due to its rich collection and unusual architecture, but also its complex history, connected with numerous changes of owners and several reconstructions.

History of the Grassi Palace

In the 18th century, the rich Venetian family Grassi just started to enter the circle of the Venetian nobility. In 1718, after the donation of 60 thousand ducats in silver for the war with the Turks, they were included in the list of patrician families. However, in order to be finally accepted into the secular society, it was necessary to build a house on the bank of the Grand Canal, in the place where representatives of the richest and most influential families of the Republic of Venice lived.

The famous Italian architect Giorgio Massari was the author of the project of Grassi family residence, who worked on creation of the palace from 1748 to 1772.

However, in 1840 the palazzo was sold to the Venetian commercial company, from that very moment an endless series of change of owners began.

In 1857, the palace was bought by Baron Simeon de Sina, who decided to reconstruct the palazzo. During this period, elements of the Renaissance style disappeared from the outer decoration of the palace, while interior was radically transformed, and a beautiful garden appeared around the Grassi house.

The next reconstruction was carried out at the beginning of the 20th century. Then the palace was equipped with the latest technology, electricity was supplied to the house, as well as central heating. The son of the Swiss industrialist Giovanni Stucky supervised the repair.

In 1951, the International Center for Arts and Costume was opened in the Grassi Palace. After that, a roof was set in the courtyard, and instead of a garden, a platform was set up for the demonstrations and shows.

In 1983, the concern "Fiat" bought Palazzo Grassi and it was turned into an exhibition gallery according to the project of the Milan architect Gae Aulenti. Collections dedicated to the Etruscan, Maya and Celts civilizations were exhibited in the palace. Exhibitions enjoyed great popularity among the citizens, and the Palazzo Grassi itself was called the Museum of Culture and Life of Italy. Also the works of Salvador Dali were demonstrated here.

In 2005, the palace was sold again, the new owner was the French billionaire Francois Pinault, who exhibits items from his personal collections and holds thematic exhibitions here. With the new owner, changes are being made to the palace again. Now they are more oriental, as the Japanese architect Tadao Ando is a supervisor of the reconstruction.

Palazzo Grassi in Venice is located on the banks of the Grand Canal, near the Piazza San Marco. You can get here on the popular city transport vaporetto – water bus.