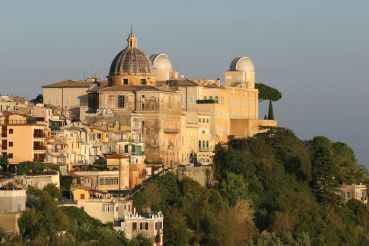 Papal villa is located 22 km from the Vatican and 15 km from Rome, in the small town of Castel Gandolfo, with a population of 9000 people. It is located on an area of about 50 hectares, much of which consists of orchards and vineyards.

The summer residence of the pontiffs consists of:

Papal palace in Castel Gandolfo contains a farm with dairy cows, poultry, and in parts of the residence, bordering on Villa Barberini, is an apiary.

Pope Francis has refused to use the residence, and it was opened for tourists from around the world. Tourists can look the outside of the villa and take a walk along the paths of the garden Levant, as well as look the adjacent garden Barberini with a rose garden, magnolia garden, located on the place of the villa and the theater of Emperor Domitian.

The Papal Palace located in a legendary town of Castel Gandolfo, the birthplace of Romulus and Remus, and is located on the western slope of the amazing beautiful blue lake Albano, the crater of an extinct volcano. The facade of the palace overlooks the central square della Liberta. The building along with the adjacent Villa Barberini refers to the state of the Holy See, and is protected by Swiss Guards Vatican. After seeing the Palace of the Popes, take a walk through the gardens of the Barberini, you can go down to the lake.

Pope's residence belongs to the papacy since the XVI century. Earlier, the neighborhood of Castel Gandolfo belonged to the counts Tuscola, after passed to the Gandolfo family. With no means to pay the debt, Gandolfo family gave their possessions to Pope Clement VII.

But only in the late XVII century, the famous architect Carlo Maderna began work on the construction of the papal palace on the place of an ancient castle Gandolfo. Pope Urban VII was amazed with the beauty of Lake Albano and the surrounding forests, and he participated in the design of the palace and the creation of landscape design. Later, to the possessions of the church was added territory of Villa Barberini.

Sights of the palace

Looking around the summer residence of the Popes, it is possible to see a lot of historical and architectural monuments belonging to the papal possessions:

The best way to get from Rome to Castel Gandolfo by train from the station Termini, the duration of the trip about an half hour, the cost of travel a few euros. From the station you need to walk up the path, bypassing the villas.To the Castel Gandolfo you can also reach by bus from Rome with direct route from the bus station Anagnina.Find summer residence of the Popes is easy – all the streets of Castel Gandolfo lead to square della Liberta and Papal villa.

19.06.2014
Gardens of the Papal Residence at Castel Gandolfo are open for tourists
Castel Gandolfo is a small town on the Alban hills in Lazio region, about 30 kilometres from Rome. Its population is about seven thousand people
More
Facebook ()
Address:
Piazza della Libertà 7, Castel Gandolfo 00040, Roma, Italia
Phone number:
+906 XXXXXXXX