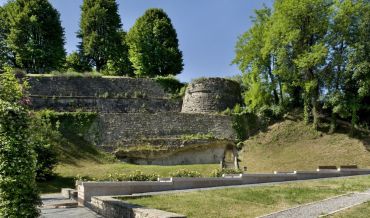 San Vigilio Castle in Bergamo is an ancient fortifications in the Upper Town. The fortress has rich history, but it is remarkable not only because of this. The castle is located on a hill that dominates the surrounding terrain. From it you can observe truly fascinating views of the ancient streets and buildings of the city of Bergamo. Nobody can stay indifferent in front of such beauty.

The San Vigilio hill is dominant in this area, so it was used for defensive buildings from the start. The first fortification on the hill was built by the Romans. It was in the 6th century.

In the Middle Ages there were always active wars, so the castle did not yet have a stable name, as it was passed from hand to hand. And each time new owners improved it according to the latest word of engineering thought. This took place in turn in the 9th, 12th, 14th and 15th centuries.

At the beginning of the 16th century Bergamo became part of the Republic of Venice, and the castle underwent the most significant changes. The fortress was expanded, connected to the walls, and an underground passage was erected in the fort of St. Mark in the city – for the transfer of troops and provisions. In the castle there was the highest observation tower in the city. In 1797, the French garrison was stationed here, this was the last use of it for military purposes.

After the Napoleonic wars, the castle was partially destroyed by the Austrians. Nowadays, it belongs to the city, and there is a beautiful park around its towers.

San Vigilio was named after Bishop Trento, who lived in the 4th century, today known as Saint Vigilius. He actively fought against the Arians and Pagans. Of course, not without the overthrowing of monuments, statues and shrines of the ancient Roman gods. For this the inhabitants of one of the villages beat Vigilius with stones to death. This was supposedly in the Rendena Valley, near Lake Garda, 100 km from Bergamo. What did not stop them from calling the fortress in the name of the holy martyr.

Now the building is in pretty decent condition. In terms of construction, it has a pentagonal foundation, which contributed to the defense. Now the impressive walls that go to the city are well preserved, as well as 4 watch towers. The latter have not been rebuilt since the 16th century, some of them can be climbed.

Also, many loopholes, bridges and passages were preserved. Previously, you could go with a guide along one of the trails that leads to the city, but now it is closed for restoration. From the towers of the castle you will see a stunning view of the old town and the surrounding hills. In good weather, even the Alps are visible.

Around the construction walls there is a beautiful, but not an easy road. You can also go up from the bottom of the hill on the funicular. Around the fortress there is a park, which in summer smells like Mediterranean vegetation. You can relax here after visiting the castle.

There are several restaurants in the castle where you can spend a romantic dinner.

San Vigilio Castle is located in the Northern part of Bergamo, on Via al Castello. You can easily reach it by bus, route 21, get out on via Cavagnis scaletta Castello. Further on foot. If you want to climb the cable car, then you need routes 1 or 10, go to the stop Colle Aperto.

If you are in Bergamo, besides the fortress, you should also visit the Cathedral, the Museum of Natural Sciences, the Duomo Square and the Old Square.

The city itself is located 50 km Northeast of Milan. To Bergamo you can get by train (both from Milan and Rome), also by plane, the city has its own airport.

Opening hours: depends on the time of year.