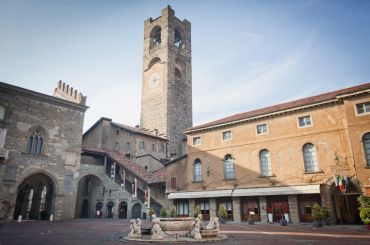 Piazza Vecchia in Bergamo or the Old Square was created in the 15th century after a demolition of several old building in this area. It became the new political and economic center instead of Duomo Square that was too small at the time. The appearance of the square clearly includes some Venetian characteristics. It is no surprise since Bergamo had been under the jurisdiction of the Republic of Venice from 15th till 18th century.

This spacious and harmonious square is now a place where you can unwind and spend your leisure time. Tiny cafes and restaurants fit in with antique local architecture greatly here.

Sights to see on Piazza Vecchia

A collection of icons and paintings is put on display inside the Palazzo della Ragione. We recommend you to check opening hours in advance before going there.

Many Italian cities and towns have towers. At first, they served defense purposes. Furthermore, the tower showed what kind of title the owner held. The higher was the tower, the richer and more powerful was its possessor. Originally, Torre del Comune was 37 meters high. However, it became 54 meters high in the 16th century after having been rebuilt few times.

Contarini Fountaine was dismantled in 1885, and a monument to Giuseppe Garibaldi was set on its spot instead. At the beginning of 20th century, the memorial was moved to the Lower City and the fountain put back in its rightful place.

Piazza Vecchia is located in the Upper City, the historic part of Bergamo. You can get there by cable car. Then you should walk 300 meters through Via Gombito towards the square. You can also walk up there on foot by following curvy cobblestone streets of Bergamo.