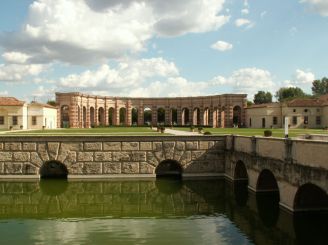 Palazzo del Te in Mantua is a recognized masterpiece created by the architect and artist Giulio Romano. The building is made in the style of Italian Mannerism commissioned by the Duke of Mantua Federico II Gonzaga. The palace was used as a country villa for leisure and entertainment of the ruler of Mantua with close friends. Modest, from the outside residence stores unique mural paintings in the rooms, such as the Hall of the Giants, Horses Hall and other masterpieces.

The Rio Canal, dugged into the Middle Ages, had divided Mantua into two large islands surrounded by lakes. The third small island of Tejeto (or shortly – Te) was somewhat swampy, and by order of Gonzaga's father, the area was drained and adapted for horse stables. At that time, the Gonzaga family was famous for breeding and supplying thoroughbred racers for famous families of Europe.

After the death of his father, his son Federico inherited possession of Mantua and decided to build a country villa on the island next to the stables. His choice fell on the beloved student of Raphael, architect and artist Giulio Romano, who used all of his imagination and skill in the construction of the palace. Construction work lasted for a record 18 months (1524-1525), but the decoration and painting of the interior halls stretched out over a long ten years.

Unfortunately, the luxurious Villa del Te in 1630 was looted by the imperial troops of Ferdinand II during the War of the Mantuan Succession. All property was taken out, and the magnificent palace was devastated and abandoned. At one time warehouses, barracks for the military and so on were located here. In 1866, Villa del Te was acquired by the Italian government, and from 1876 the building became the property of the Mantua municipality. After restoration work the civil museum was placed in the palace. Since 1990, Palazzo del Te has been the International Center for Arts and Culture, which holds exhibitions of modern and ancient art.

As for the suburban residence, the villa has rather impressive size. The architect used the classical order style and rustication (rough cut stone) to decorate the façades. Generally, the volumetric-spatial plans are quite complex here. Externally, the façades of the palace seem to be symmetrical, but in reality the distance between the columns is not the same.

Villa del Te has a rectangular layout with a large internal garden, surrounded by rows of columns in front of outbuildings. The colonnade of the semicircular shape, called Еsedra, completes the complex.

The palace is a square building with a large inner square courtyard and four entrances leading to the courtyard. The main entrance is a loggia facing the city – this is the Loggia Grande, consisting of three large arches on paired columns. In the western part of the palace there is a square lobby with four columns, which divide it into three naves.

Halls of the Palazzo del Te

Palazzo del Te is known for the unique frescoes by Giulio Romano and his assistants. It is one of the most vivid examples of the Mannerism art. The most large-scale murals are located in three rooms.

Other halls are no less interesting, among them:

A secret corner was built in the eastern part of the garden, next to exedra. The room consists of several rooms decorated with frescoes. From the small loggia you can get into the small garden, and from there into the cave room, which was previously used by the nobles as a bathhouse.

There are several museum collections in the halls of Palazzo del Te.

Palazzo del Te in Mantua is located on Viale Te Street, 13. Nearest stop: Palazzo Te, the TE public transport goes to it. Also there is a bus stop Visi 4, buses 5 and 7E are coming here.

Opening hours and cost of admission may vary.