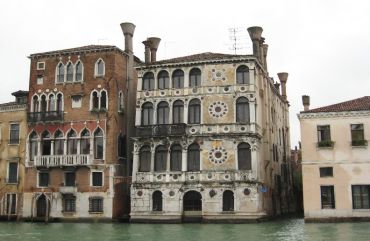 Palazzo Dario is a palace in the central part of Venice, in the Dorsoduro district, located on the bank of the Grand Canal. Dario is one of the most beautiful and interesting buildings in the city. However, among the inhabitants of Venice, it is known as the "cursed palace". This is due to the numerous tragedies and troubles that have fallen on the fate of families who lived in the palazzo. The construction of the late 15th century is one of the most interesting and truly magnificent examples of Renaissance architecture. The facade is made of colored marble and is composed of mosaics.

History of the Dario Palace

The Palace of Dario was built in 1487 in one of the most fashionable regions of Venice of the 15th century – Dorsoduro – commissioned by Giovanni Dario, a man who served for many years as the Venetian ambassador in Constantinople.

The author of the project was the architect Pietro Lombardo. The master was able to design an elegant palazzo in the popular at that time style – Venetian Gothic. However, due to clearly expressed asymmetry and small size of the palace, the building resembled a house of cards. The main decorations of the façade of Palazzo Dario are medallions of reddish porphyry and green granite.

A large-scale restoration of the palace was held in the late 19th century, at that time it belonged to the French aristocrat and writer Countess de la Baume Pluvinel.

In 1908, the famous artist Claude Monet depicted the composition of Palazzo Dario on his canvas. Currently, this picture is stored at the Arts Institute of Chicago.

At the end of the 20th century, the Hollywood director Woody Allen married in the walls of Palazzo Dario. There are rumors that the director wanted to become the owner of this palace. However, because of the many gloomy stories associated with the building, he did not dare to take this step. The last tragedy in the walls of the house occurred in 1993 – then one of Italy's richest industrialists, who was implicated in the corruption scandal committed suicide. Currently, the palace belongs to a family from the United States.

Palazzo Dario is located in the central part of Venice. Its façade faces the Grand Canal, and the second part – to the Campiello Barbaro. Opposite it, there is the marina of Santa Maria del Giglio. You can get there on the popular city transport vaporetto – water bus, which takes residents and visitors along the main canals of Venice.