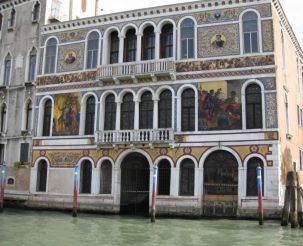 Palazzo Barbarigo in Venice is a palace on the banks of the Grand Canal. It was built in the 16th century, and for many years belonged to the famous Barbarigo family, that gave Venice a lot of great generals, politicians and religious figures. Currently, the building of the palace is used as an exhibition hall, it is open for visiting and there are trading spots in it. Here you can not only admire the many works of Murano glass blowers, but also purchase your favorite thing.

The history of the palace begins in the 16th century, it was built in the Venetian-Byzantine style, which was distinguished by strictness and was devoid of a large number of decorative details. The main architectural decoration of the building was only classical for the Venetian palaces loggias on the upper tiers.

In 1886, the palace was acquired by a family that owned glassworks on the island of Murano. The new owners decided to decorate the facade of the house with a mosaic made of Murano glass. Scenes from the history of Venice art were selected, such as – visit of King Henry III to the island of Murano, the meeting of King Charles V and Titian in the master's workshop and others. Despite the fact that at present mosaic is recognized as the main decoration of the palace, many Venice residents of the 19th century did not accept innovations on the facade of the palazzo and considered them a bad taste.

From the historical point of view, the palace is interesting because Cardinal Gregorio Barbarigo was born here. He helped the Italians during the plague epidemic in 1656-1657, contributed to the development of education in the country. He served as bishop, and then as cardinal priest in Padua and Bergamo. At his own expense, he bought a building for the seminary in Padua, and also opened a printing house in the city. In the 20th century, Pope John XXIII produced Barbarigo in the face of the saints.

The creative activity of the great artist Titian is also closely connected with the Palazzo Barbarigo building. He created many of his paintings for this palace. For many years, his paintings were exhibited there, but when the famous family ceased to exist, the pictures were scattered all over the world.

In order to get to the Barbarigo Palace, you need to use popular in Venice transport – vaporetto – water bus. Nearest stop: S. Toma' DX.