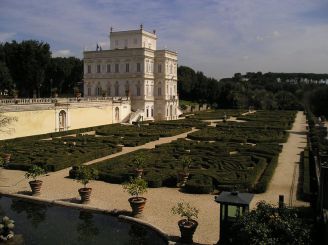 The Villa Doria Pamphili in Rome is a palace that once belonged to an Italian royal family. It is located on Tiber’s west bank, in Trastevere, 1,5 km south of the Vatican City. The Museum of the Roman Republic and Garibaldi Memorial is situated close to the villa. Its gardens are popular among both tourists visiting the Eternal City and locals. Currently, it is considered to be one of the most beautiful and best-maintained parks in Rome.

The whole villa including adjacent gardens was owned by the Pamphili family since the early 17th century and generally served as a summer residence. In 1644 Giovanni Battista Pamphilj became Pope Innocent X. Shortly after this reconstruction works were performed on the villa and all the surrounding gardens were bought.

In 1652 villa’s new building was finally finished. Alessandro Algardi, later a famous personality, was in charge of this project and had Giovanni Francesco Grimaldi helping him. This collaboration resulted in a magnificent four-story mansion with just as beautiful garden.

The issue regarding inheritance remained unresolved for a long time when the last male member of Pamphili family passed away in 1760. Eventually, in 1763 this vast estate was given to blood relative Giovanni Andrea Doria IV. In the 18th century, gardens and villa itself were actively redesigned.

In 1957 Villa Doria Pamphili was sold to the government of Italy. In 1970 the park already had a street running through it, and then in 1971, the whole place was opened to the public.

Today this huge and absolutely awe-striking park area welcomes visitors (only 94 out of 184 hectares are actually accessible). The place boasts a great number of footpaths and bike paths, playgrounds as well as a dog park and a small café. You can also come watch birds here since there are viewing decks built specifically for this. Pond with turtles and swans. People come to the park for picnics and relax mind and body.

Opening hours: depend on the season.