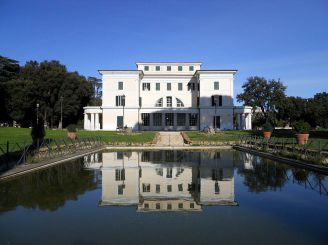 Villa Torlonia in Rome is one of the most wonderful building complexes of the Italian capital. Located a bit north-east of Porta Pia, it is considered to be the last noble Roman villa. This mansion draws visitors not only by being the architectural treasure but by offering a collection of antique sculptures, intriguing House of the Little Owls, English landscape park as well as bunker built for Benito Mussolini himself.

The estate is relatively newly built since its construction commissioned by Giovanni Torlonia started in 1802 and was finished in 1806. The architect named Giuseppe Valadier was put in charge of the project. He created the main building, House of the Little Owls and the English park. When the commissioner passed away, his son Alessandro Torlonia continued expanding and enriching the place with new constructions. Consequently the Temple of Saturn, Moorish Grotto, the Tribuna con Fontana, amphitheater, orangerie and the Swiss Hut (today referred to as House of the Little Owls). The mansion reconstruction was completed after placing three obelisks: two made of pink granite and dedicated to deceased parents of Alessandro, the other rounded one served as a monument to his sibling Carlo who died earlier.

In 1919 Jewish catacombs of the 3rd and 4th century were discovered in the north-western part of the villa. In 1925 the owner offered his mansion to dictator Benito Mussolini as a place to reside in for a token fee of 1 lira per year. Italian fascist leader lived here till 1943. When the war burst out, it was decided to build a bunker on the ground floor. However, it was never finished. Then later the underground shelter was opened ,to the public in 2006. The World War II left a devastating impact on the vi,lla. However, it was bought by the government in 1977 and became open to visitors in the following year. The majority of the buildings around the area were restored during immense renovation works that continue to this day.

Villa Torlonia is located on Via Nomentana, 70, north-west of Villa Borghese, another beautiful place. The easiest way to this landmark is by bus that follows routes 62, 66, 82. Nomentana/Trieste stop is where you should get off. You can also take trams 2, 3 or 19 and get off on V.le Regina Margherita/nomentana stop.