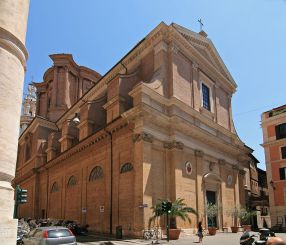 Sant'Andrea delle Fratte is one of the many Catholic churches in the center of Rome. It stands out because of the beautiful minimalist façade and a very luxurious interior. As you might guess, the church is dedicated to the Apostle Andrew.

History of the Basilica

In the 11th century, a church already existed at this place, which was a former suburb of the city. It stood in the middle of the garden, gradually turning into forest thickets. This is the reason why it has gotten its name. In 1192 it was replaced by a new temple, which was later rebuilt several times.

In the period 1653-1658 Francesco Borromini worked on the basilica, and after his death the student of a famous architect continued his work. Thanks to their efforts, a modern dome, bell tower and apse appeared. Until 1585, the church served as a parish for Scots living in Rome. Pope Sixtus V handed it over to a poor Order of Minims, it still remains under their jurisdiction even today. The modern façade is the result of the reconstruction of 1862.

The façade of the church is made in the Neoclassical style, although there are some trends characteristic of the 16th century. The outer walls are lined with red brick, and the bell tower is white, which creates a certain contrast. The general features of the façade are rather restrained and very rich with decorations. The ground plan of the church is in the form of a Latin cross, with one nave and a deep apse. On both sides of the nave there are 3 small chapels.

The interior contrasts sharply with the poor exterior, it shines with its magnificence and solid gilding. The chapels are decorated with marble inlays. On the walls of the temple there are many paintings and frescoes by famous Italian artists of the 17th and 18th centuries.

Of course, the main highlights of the temple are 2 marble statues of angels. They were created by Gian Lorenzo Bernini for the Ponte Sant'Angelo, commissioned by Pope Clement IX. The pontiff found them too beautiful to be affected by the weather and presented them to the sculptor. In 1729, the descendants of Bernini donated the statues of the church. Under the main altar of the temple there is the entrance to the crypt, in which some famous artists are buried.