Church of Saint Agnes Outside the Wall, Rome 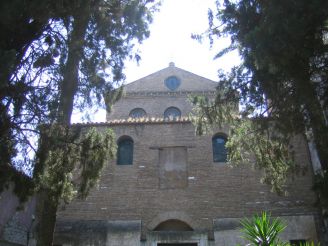 The Church of Saint Agnes Outside the Wall in Rome (Sant'Agnese fuori le Mura) is an ancient church located quite far from the city center. But the respectable age and its proximity to the catacombs of Saint Agnes make this temple a tasty morsel for many tourists.

In the past, another church had been standing at the same place since 342, but it significantly deteriorated. That is why, Pope Honorius I decided to build a new, larger basilica. It was erected in the first half of the 7th century above the place of death, in the catacombs of the holy martyr Agnes. In 723, the temple suffered after the Lombards' raid, and was restored by Pope Adrian I. In 1241, the church was again destroyed by the German king, and it was restored again by the efforts of the ruling pontiff.

In 1479, Cardinal Giuliano della Rovere built the bell tower at Sant'Agnese fuori le Mura. At the beginning of the 17th century, restoration was carried out thanks to the assistance of Pope Leo XI, and on April 14, 1615, the relics of Saint Agnes were transferred under the altar from the catacombs.

In the 17th and 19th centuries, six side chapels appeared in the church. In 1728, the Cosmatesque style floor was dismantled and replaced with a brick one. In 1855, Pope Pius IX conducted a large-scale restoration, during which a new marble floor was installed. And in 1856, new paintings appeared as decorations.

The building has a modest façade from the outside. It is plastered in the lower part, and a brick cladding of the 17th century is preserved in the top part. On the second floor there are 2 small windows, and on the first – 3 entrance doors.

Before the main part, there is a narthex with a preserved marble slab dedicated to Saint Agnes by Pope Damasus I. It also has a marble sarcophagus with the remains of St. Liberius.

Structurally, the church has 3 naves, separated by Corinthian columns from the time of the first construction. In the side naves there are 3 chapels.

The decoration and the interior of the church are the result of the 19th century restoration, they replaced the original frescoes. But the restored coffered ceiling has been preserved to our days in excellent condition. The side chapels are decorated with marble reliefs and beautiful frescoes from the 15th century.

The altar of 1620 is made of marble with inlaid precious stones. A silver casket with the relics of St. Agnes and her sister is kept under it. The apse is covered with marble and is divided by three red porphyry pilasters. The apse vault is decorated with an old mosaic (in 638), depicting Saint Agnes, Pope Symmachus and Pope Honorius I.

A staircase leads from the Basilica down into the ancient Roman catacombs.

The Church of Saint Agnes Outside the Wall is located in the northeast from the center of Rome, on one of the largest streets in the city, Via Nomentana, 349. Next to it, there is the Mausoleum of Constanza, and a bit farther away there is Villa Torlonia. Near the church there is a bus stop Nomentana/S. Agnese (routes 66, 84, N4).