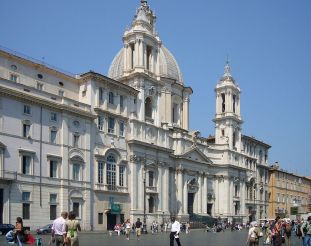 Sant'Agnese in Agone is a church, located on one of the main squares of the Italian capital – Navona. The temple is made in the form of a cross, and is named after Agnes of Rome. She lived in the 3th century during the time of the Emperor Diocletian. Agnes refused to marry the son of the Roman prefect Sempronius. Offended Sempronius offered the girl a service in the temple of Vesta, and after refusal to worship the pagan gods, decided to dishonour her by putting on naked on the square. When a young Christian woman was stripped of her clothes, a miracle happened – her hair instantly grew and covered the girl to the heels. Agnes herself began to glow with a bright inner light. The shine frightened the barbarians – they were afraid to touch her.

Agnes of Rome, who was only 12 years old at the time of death, is a symbol of spiritual purity and the patroness of virgins.

History of Sant'Agnese in Agone

Previously, in the place of the modern Church of Sant'Agnese in Agone, there was a temple built by Honorius in the 7th century on the site of the early Christian catacombs where Agnes was buried. First, place around her tomb was cleared so that relatives and pilgrims could come on the anniversary of her death. In the 4th century, a mausoleum was built over her grave in honour of the daughter of Emperor Constantine, as she was cured of leprosy at the tomb of Agnes.

The construction of the church in its modern shape began in the 17th century under the decree of Pope Innocent X. It was meant to be the family chapel of Pamphili, whose palace already adorned the Navona Square. Architectural ideas were realized by the great master of Italian baroque Francesco Borromini.

Sculptures in the Temple

In the Church of Sant'Agnese in Agone, you can see its most important shrine – the head of Saint Agnes, stored in a silver reliquary in the crypt. The temple is made of polychrome marble, the walls are decorated with unique frescoes, gilded ornaments on Stucco plaster. The architecture of the dome is made in a unique technique – visitors sometimes feel that it is slowly rotating about its axis. In the temple you can see unique sculptures:

You can get to Sant'Agnese in Agone in Rome by bus №36, reaching Piazza Navona. The building is located only 500 m from the Pantheon. Signs show the road.