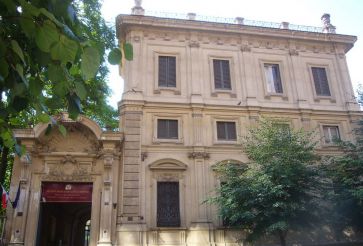 Boncompagni Ludovisi Decorative Arts Museum of Costume and Fashion in Rome is named this way for a reason as it has exhibits highlighting Italian fashion put on display here. Around 800 garments and accessories tell a history of fashion development in Italy. It is indeed an interesting place for those who love shopping and art.

Museum’s history is relatively short compared to family’s one which is way more colorful and rich and dates back to the 12th century. Boncompagni was a papal family, and during 17-18 century its members had been cardinals. The most famous one was Ugo Boncompagni who was elected a pope in 1572 and initiated an establishment of the Gregorian calendar. Then in 1681, the head of the family married a woman of noble Ludovisi household which is why its descendants had a double-barrelled name.

Villa in which the museum is located was built in the early 20th century and served as a domicile for noblemen till 1972. Andrea Boncompagni had no heirs and when he passed away his widow Alice Blanceflor de Bildt decided to gift the whole villa including its interior decorations to the Italian state. There was one condition however – the mansion had to be turned into a cultural centre. After all the red tape that lasted for 20 years the restoration works were finally performed on this manor. In 1995 the villa was opened to the public as a museum.

The first museum selection was focused entirely on decorative arts. Currently, there are different exhibitions which include art, architecture as well as fashion and design pieces of different time periods from the end of the 18th century to modernity.

Artworks of famous artists and cultural figures, such as Ernesto Basile, Galileo Chini, Duilio Cambellotti, Felice Casorati, Leoncillo, were donated to the museum and put on display here.

Savoy Umbertino cradle, an impressive work of art from 1901 made by Giulio Monteverde out of silver and gilt-bronze, is considered to be a highlight of the hall where it is kept.

Dry names like these cannot convey that glory of eras you plunge into when entering the museum. You literally experience the life of Italian aristocracy during the period from the 18th to 20th century firsthand. What a majestic atmosphere such places have!

The Boncompagni Ludovisi Decorative Arts Museum is situated basically in the centre of Rome, on Via Boncompagni, 18, south-east of Villa Borghese, only three blocks away from it. The nearest bus stop is Boncompagni/Piemonte. You can catch buses №63, 83, N4 there.

Opening hours: the museum is open 9:30-19:00 from Tuesday to Sunday, closed on Mondays.