Trajan's Market and The Museum of the Imperial Forums, Rome 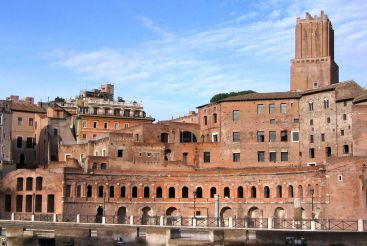 The Museum of the Imperial Forums and the connected to it Trajan's Market are one of the most visited attractions in Rome. It is immediately worth noting that you should not confuse the Imperial forums with the Roman forum – these are somewhat different complexes, although their stories are intertwined. Imperial forums are a complex of architectural monuments of Rome in the period of the early Roman Empire (approximately 1 century BC). The Museum of the Imperial Forum not only shows the preserved exhibits of antiquity, but it is also an important architectural and historical landmark, the same as the surviving walls of the Trajan's Market.

"Imperial Forums" is the name of the five monumental complexes, the construction of which took place from 46 BC to 113 year AD:

The last of the constructed – the Forum of Trajan – was opened in 113 AD. Later, the famous Trajan's Market was opened. The forums were built on the money and other resources won during the wars. Each forum was built according to the wishes of the ruler of that time, who promised peace and prosperity.

Ancient Roman architect Apollodorus from Damascus worked on building a five-story shopping complex. The terraces that make up the floors were built on the hillside. About 150 taverns, shops and other things were opened in the Trajan's Market. At that time the design was unique. Bricks, concrete, stones were used. The fire wall separated the market from the Trajan Forum.

In the Middle Ages the market was completed. For example, there was the Tower of the Militia, which can be seen today.

The modern entrance to Trajan's Market is on Via Quattro Novembre, 94. To get there, you can take the subway line B, get off at Colosseo station and take a walk on Via dei Fori Imperiali.