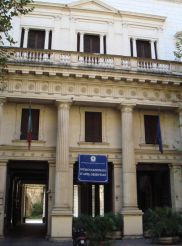 The ‘Giuseppe Tucci’ National Museum of Oriental Art is one of the most interesting museums in Rome. The collection highlights the art of Oriental and Asian nations. It is located inside the 19th-century palace of Brancaccio, a noble family from Naples.

The National Museum of Oriental Art was opened in 1958 with the help of the Italian Institute For The Middle And Far East and the Italian Ministry of Education, University and Research.

The objects collected by Giuseppe Tucci are the major part of the collection. All his life the scientist had been treasuring various pieces he found during expeditions. Those were mainly artworks from Nepal, Iran, India, and Tibet.

In 50 years of its existence, the museum had been increasing its number of exhibits through own efforts and contributions from patrons of the arts.

Who is Giuseppe Tucci

The National Museum of Oriental Art was named after Giuseppe Tucci, one of the first Italian orientalist. Over the years of work he took part in numerous expeditions and wrote more than 360 academic papers, focusing on the history of Oriental art. Aside from research articles, he was the author of monographs and teaching aids. Giuseppe Tucci was also the founder of the Italian Institute For The Middle And Far East.

The collection of the National Museum of Oriental Art

The museum offers a large number of valuable exhibits put on display in 14 halls of the palace. The highlight of the collection is Iranian ceramics from the Iron Age. There are also:

The collection is split into several thematic exhibitions, each one of them introduces visitors to history and culture of a certain region:

The ‘Giuseppe Tucci’ National Museum of Oriental Art is located in the center of Rome, near Piazza Vittorio Emanuele II and the Basilica of Saint Praxedes. You can get here if you take: