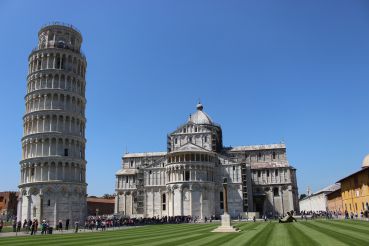 The Leaning Tower of Pisa is one of the most popular spots in the city of Pisa and throughout Italy. The main feature of the structure is that it is not strictly vertical, but slightly sloping. The citizens and tourists are drawn to this "lengthy miracle" that has been falling for more than 8 centuries. Nowadays, the tower is five meters off perpendicular, which means that the tower is actually falling at a rate of one millimetre per year. The building is part of an architectural ensemble that includes:

History of the Leaning Tower of Pisa

The construction of Pisa's iconic landmark, as well as the adjoining cathedral and baptistery, started in 1173 on the outskirts of the city. The work lasted more than two centuries including breaks. The belfry was opened in 1370. The authorship of the project is not clear, although one of the versions suggests that it belongs to Bonanno Pisano.

The tilt of the tower was not panned from the outset but became the architect's mistake. When the first floor was built, the construction reached the height of 11 metres, which made the bell tower incline to the South. The sloping height was only 4 centimetres, but building works were halted and resumed only 100 years later.

In 1275, when the erection of the belfry was recommenced, the angle of inclination was 50 centimetres. The project implied the usage of all the technologies relevant at the beginning of the 13th, but nothing helped to save the tower from falling. The construction was stopped ahead of schedule with the decision to make the building 4 floors lower.

The Leaning Tower of Pisa is a representation of the Romanesque style, which is characterized by elegance and beauty of the details. The landmark is 58 meters and 36 cm high and is around 15 meters in diameter. The thickness of the walls decreases from 5 meters at the bottom to 2.5 meters at the upper part.

294 steps lead to the top of the tower which is made of stone and is decorated with light white and grey marble. The entrance is embellished with bas-reliefs depicting mythical animals. Andrea Guardi's sculpture of Madonna and the Child deserves special attention.

The first tier of the building contains arches with semicolumns. The next six floors are decorated with Romanesque arcades, which resemble Byzantine architecture.

The belfry with seven bells, the weight of which ranges from 300 kilograms to 3.5 tons, crowns the construction. The very first bell was cast in the 13th century, whereas the other ones were made in the 16th and 17th centuries. It's worth noting that all the bells are in working condition and please tourists with their ringing.

Restoration of the Leaning Tower of Pisa

At the end of the 20th century, Italian scientists carried out a good-quality restoration of the monument. The research figured that the soil under the southern base of the building is much softer than under the northern part of the foundation, which causes the belfry's falling. Steel cables were anchored in the ground to prevent the structure from further southern movement while part of the ground under the northern base was carefully dug out with special devices.

As a result, the level of inclination reduced by almost 50 cm, thereby having rejuvenated the tower by several centuries. Currently, the main attraction of Pisa is in a stable state.

The main tower of Pisa is 40 minutes walk from the central railway station. You can also use public transport: buses 120, 140, E03, E25. Get off at Pisa Rossore station.

Working hours: from 1990 until December 2001 the Tower was closed for visits. Today, its doors are open to tourists all year round: