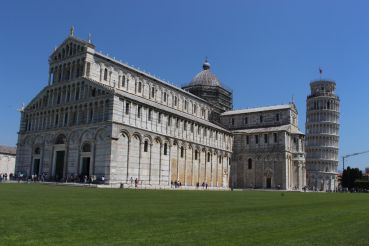 Pisa Cathedral (Duomo di Pisa) in the city of Pisa is one of the most significant masterpieces of Romanesque architecture in Italy. The church is dedicated to the Assumption of the Blessed Virgin Mary. The Pisa Cathedral, together with the Tower of Pisa, the Baptistery and the Campo Santo Cemetery, is a part of an architectural complex located on the Piazza dei Miracoli, also known as the Piazza dei Duomo. Since 1987, the church, as well as other attractions of the whole complex, is included in the UNESCO World Heritage List.

History of the Cathedral

The construction of the church was started in 1064 and lasted until 1180. At that time Pisa was a strong seaside republic, and construction financing was largely carried out at the expense of military wins. The preserved inscription of the time on the façade of the cathedral is the evidence to it. The temple was consecrated by Pope Gelasius II on September 26, 1118.

The construction of the cathedral can be divided into two periods.

In different epochs the cathedral was repeatedly reconstructed. The largest reconstruction was carried out after a violent fire in 1595.

Originally, the Duomo di Pisa was erected in the form of a Greek cross with a dome at the intersection of rails. In the current plan, it is the cathedral with five naves and transept having three naves that resembles a Latin cross. The architecture of the cathedral includes the stratification of elements of different styles – Classical, Lombard, Byzantine and even Arabic. Later a similar style of construction was called the Pisa Romanesque style.

Exterior of the cathedral

In the exterior of the Pisa Cathedral, pay attention to:

Western side. This is the main façade, consisting of four tiers of external galleries-arcades, supported by columns. Material – gray marble, richly encrusted with various colored marble, also decorated with stone carvings and statues. The top of the pediment of the façade is adorned with a statue of the Madonna with the Child and four statues of the Evangelists on either side of it. At the bottom there are three doors made in 1602. The original doors were destroyed the fire in 1595. One bronze door by Bonanno Pisano (about 1180) survived. Now it is in the museum of the cathedral (Museo dell'Opera del Duomo). 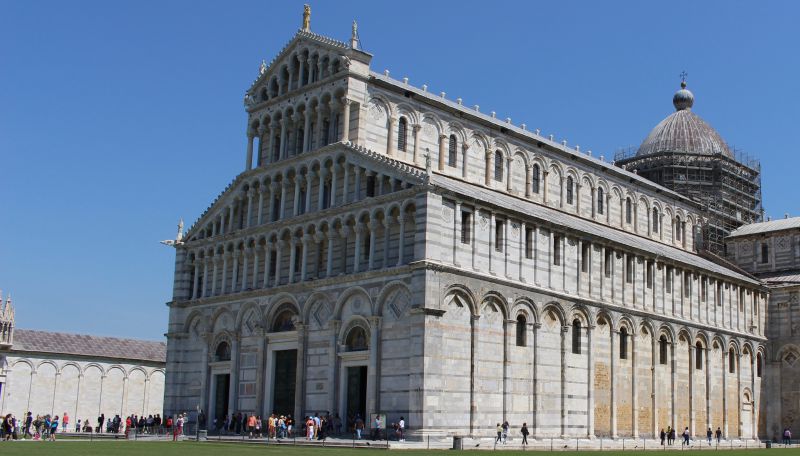 Eastern side. The top of the pediment above the apse is crowned with a copy of the bronze hippogriff – a mythical creature with bird's wings and beak, horse legs and lion's paws. The statue was made by the Arabs around the 10th and 11th centuries, and Pisa probably got it like a military trophy. The original of the Pisa Griffin is kept in the museum of the cathedral. 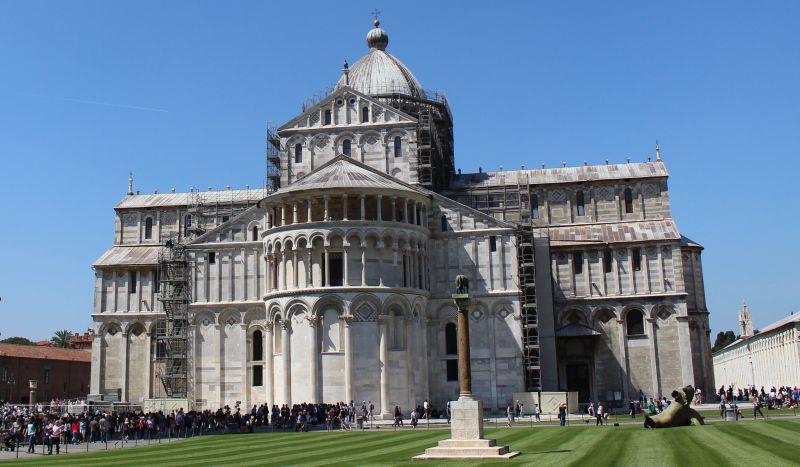 Interior of the Cathedral

The original interior of the cathedral was largely destroyed by a fire in 1595. As a result, there have been significant changes in the interior decoration. Fortunately, a unique fresco survived in the apse. It depicts Christ with the Theotokos and John the Apostle. The fresco on the triumphal arch – the Madonna with the Child also survived the fire. Also the unique mosaic floors with the Cosmatheco style (mid-12th century) survived there.

The interior of the cathedral is admirable – a sophisticated finish and rich decoration amazes tourists from all over the world. A lot of arches and the alternation of black and white marble create a sense of vast space. A high ceiling with the emblem of the Medici family is adorned with the gilding. The walls are decorated with Biblical paintings, written in the 15–16 centuries by Italian masters.

Pisa Cathedral is located in the heart of Pisa on Piazza del Duomo. You can take the bus № 4 or № 21.

The entrance to the Pisa Cathedral is free. To visit you will be given a free ticket with a fixed time. If you buy tickets to other objects of the square, you can visit the cathedral at any time of its work.

Visiting the Piazza del Duomo attraction is available every day. The entrance is allowed at 30 minutes before closing.

Visit to the Pisa Cathedral: from 10:00 to 17:00. Depending on the season, the opening hours can be extended. During the holidays, the cathedral is open for visitors from 1 pm, on 1 November to 4:30 pm.

Pisa Cathedral is an active temple and services are regularly held here. Visitors are asked to wear appropriate clothing and behave appropriately.

The cost of tickets and opening hours can vary.