Attractions of Palermo: 13 places to visit

The ancient city of Sicily and its capital, Palermo, was founded by the Phoenicians in the 1st century BC. Since then, the sights of Palermo accumulated as a snowball, to cover the traveler with an avalanche. The centuries-old history, with the change of epochs, rulers, religions and conquerors, made this city a real gem center of architectural, park, sculptural sights.

This atmosphere attracts and fascinates. After visiting the main Sicilian city, you can forever fall in love with its exclusivity.

It will take certainly more than one day to view all of the most interesting places in Palermo. We will tell you about those sights, without visiting which you cannot leave the capital of Sicily. Or, in the end, it can be a great excuse to come here again.

High above Palermo, on top of Monte Pellegrino is the majestic Castello Utveggio. Initially, the building was to become a fashionable hotel. The construction, according to the intention of the knight Michele Utveggio, was completed in 1934. Grand Hotel Utveggio did not get the deserved glory. On the eve of the Second World War, the structure fell into decay. With the onset of war, the castle hotel was completely ransacked. 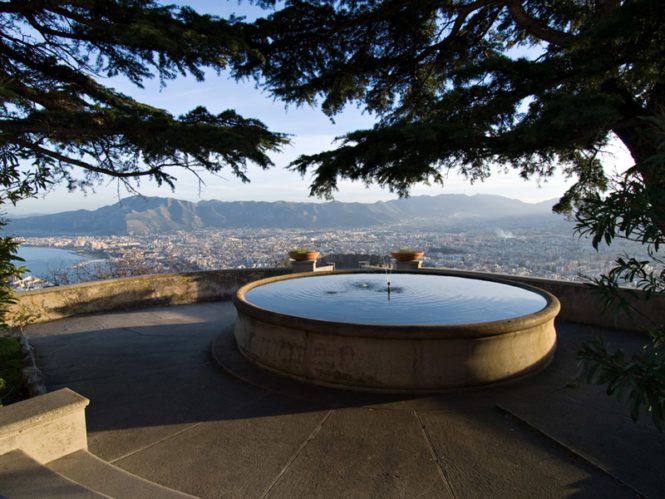 Nowadays, the completely restored castle is more popular. From its terraces, built at an altitude of 346 meters above sea level, you can observe breathtaking views of the whole of Palermo and the Aeolian Islands. Not everyone will be able to get inside, since most of the premises are in rent. But the view from the castle is worth it to come here. So you should add one more place to your list of "Interesting places in Palermo".

A stern palazzo that looks like a fortress rises on the very outskirts of the historic center of Palermo. The Royal palace of the Normans is the brightest example of a mixture of civilizations and cultures. The very first buildings on the site of Normanni belonged to the inhabitants of the ancient country of Phoenicia. After that, there were the Arabs, the Romans, the Normans and the Spaniards. Today in the palace, the Arab courtyards are closely adjoined the Norman chapel, pagan statues and Christian murals. 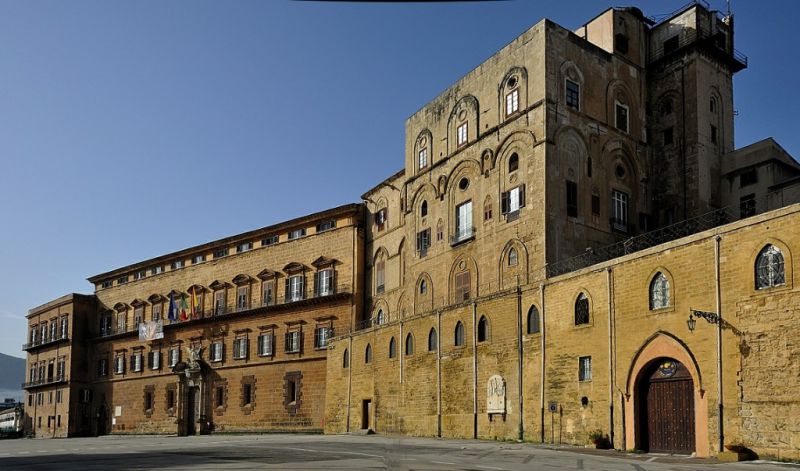 The interior of the palazzo, as well as the external facades, is full of mixed styles. The most popular part of the Palace of the Normans is the Palatine Chapel with its rarest Arab carved ceiling, included in the list of UNESCO sites. 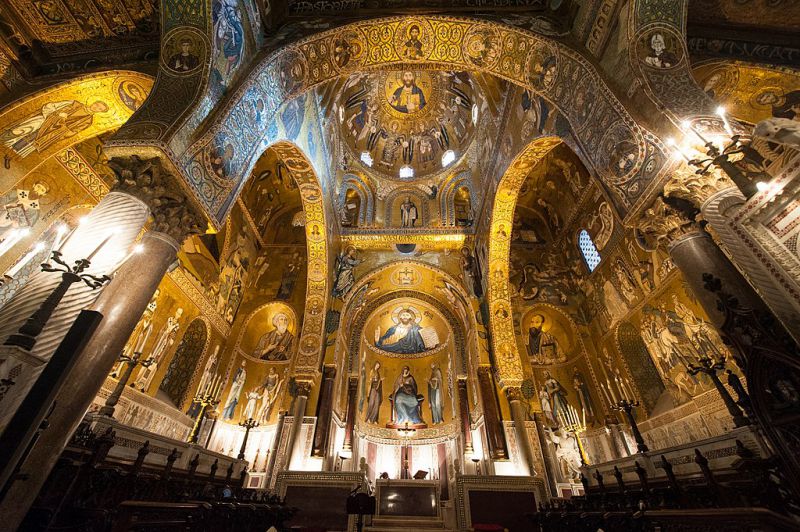 A unique example of mixed architecture is the main attraction of the island.

The Palermo Opera Theater bears its name in honor of King Emmanuel II. The unique acoustics of Teatro Massimo became famous throughout the world. This is one of the largest theaters in Europe, and the largest in Italy. It is no wonder, after all its construction has lasted for 16 years. According to the architect, Teatro Massimo should have been like the ancient Greek temples of Agrigento. 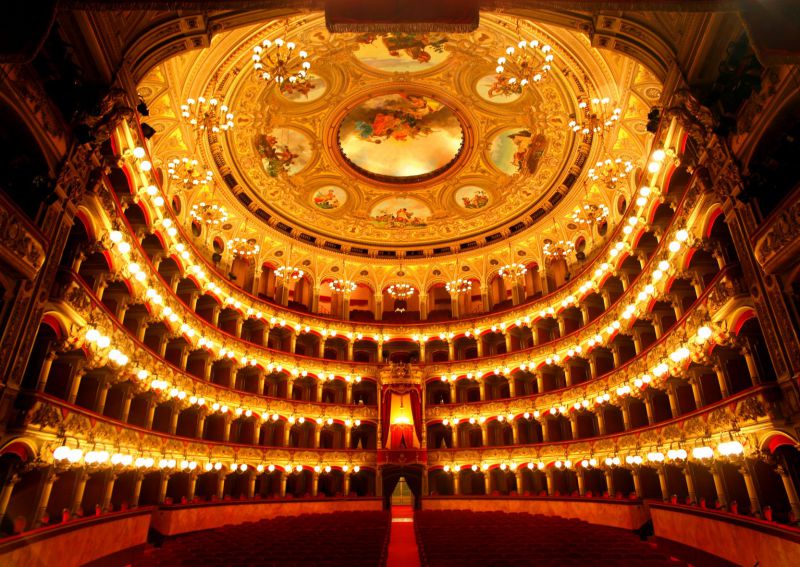 Piazza Pretoria and the Fountain of Shame

Piazza Pretoria is one of the most luxurious squares in Palermo. Here you can see:

In general, there is a lot to see. The monumental Mannerist fountain, which was built in the 16th century by the sculptor Francesco Camilliani is of particular interest.

A large fountain is a composition consisting of several basins. The statues of naked mythological heroes, various monsters and animals are chilling in them. 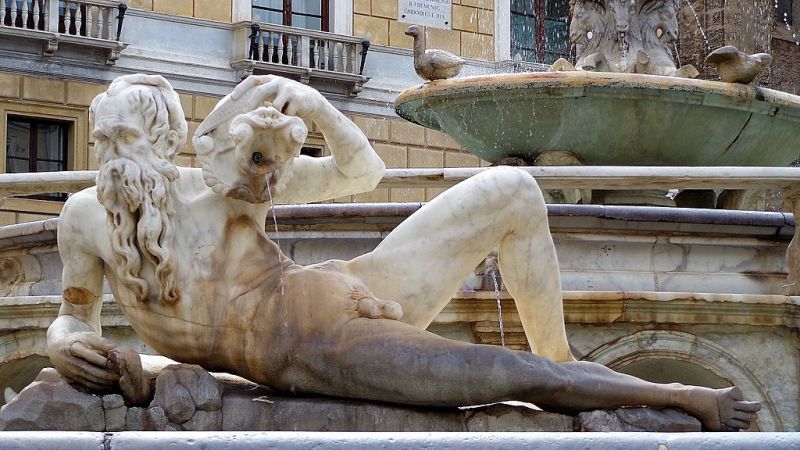 At first, the inhabitants of Palermo were very hostile to the fountain, considering it to be a corrupt building, and also because of the presence of bare sculptures. During the hot heat in the square, there was not enough coolness: passing by, people shyly looked away. Among people the fountain was called Fountain of shame. Nowadays thousands of tourists come to see it.

How to get there: walk to the square from Palermo train station. Go through Via Roma, turn onto Via Vittorio Emanuele, after 100 meters turn left and go through the narrow alley.

This unusual museum in Palermo is very attractive for tourists. It is not every day that you can see the cemetery of the unburied dead people. Such an extraordinary exhibition of mummies has been shocking visitors of Capuchin Catacombs for several centuries. 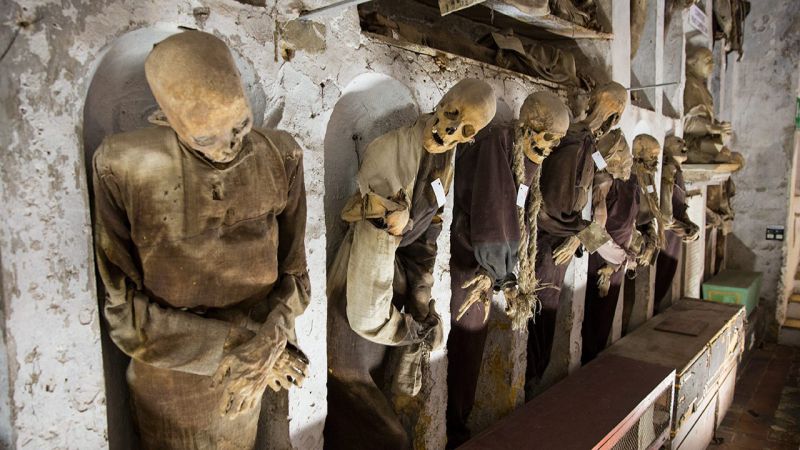 A huge crypt in the form of a long corridor along which about eight thousand embalmed corpses lie, sit, and even stand and hang. Here you can see representatives of the elite of their time, clergy, aristocracy and outstanding citizens.

The Cathedral of the Assumption of the Virgin Mary is known for its rich history and interesting architecture. It combines Arabic and Norman styles, Gothic and Baroque. The oldest Christian church stood on the site of the cathedral from the 4th century. Its complete reconstruction and consecration in honor of the Theotokos took place several centuries later, in the 11th century.

Sicilian kings and German emperors rest in the tomb of the cathedral. The priceless treasure of the temple is the relics of Saint Rosalia, patroness of Sicily. 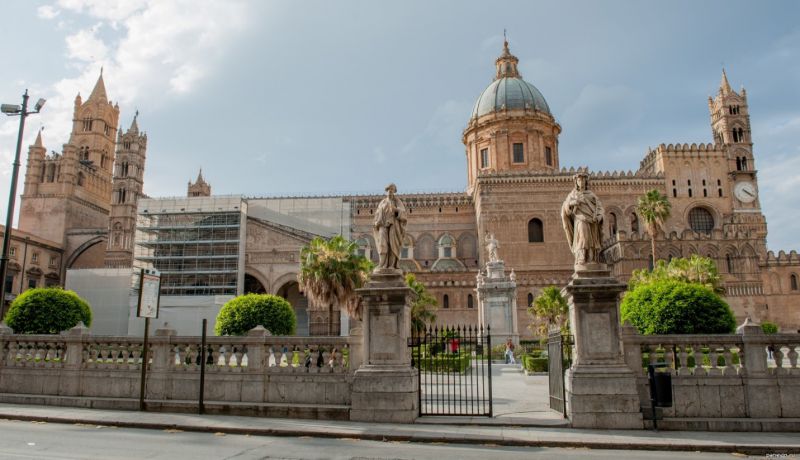 Recently, in 2015, the Palermo Cathedral was listed as a UNESCO World Heritage Site.

Another fascinating tourist site of the capital of Sicily is the International Puppet Museum. It was opened in 1975 by Antonio Pasqualino – an anthropologist, historian and man, who passionately admired folk traditions. 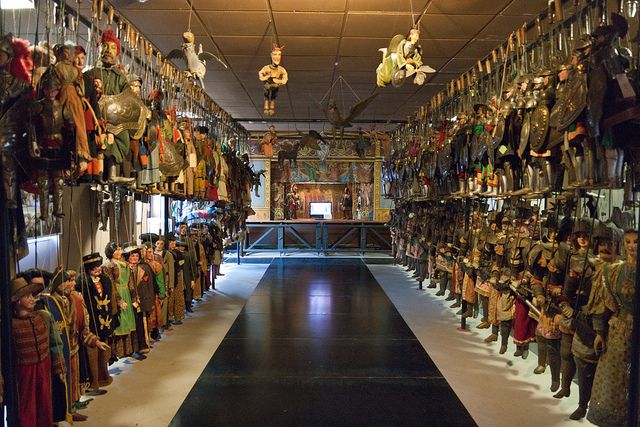 Dolls on the ropes have long been one of the main symbols of Sicily. Therefore, the richest collection of puppets is collected in Palermo. Today it includes more than 3,500 exhibits. Here you can see both rags and wooden dolls, of various shapes and sizes, in luxurious decorations and rags. Dolls from many countries of the world accurately reflect the culture and traits of their people.

In addition to a permanent exhibition of puppets, the museum hosts a traditional festival of theater and dolls – the Festival di Morgana.

Green park in the center of Palermo is the famous Giardino Inglese, created in the 19th century by the architect Giovan Battista Filippo Basile. The classic English garden is rich in various exotic plants from around the world. A convenient location allows you to include this park in the list of places that you can visit during 1 day in Palermo. 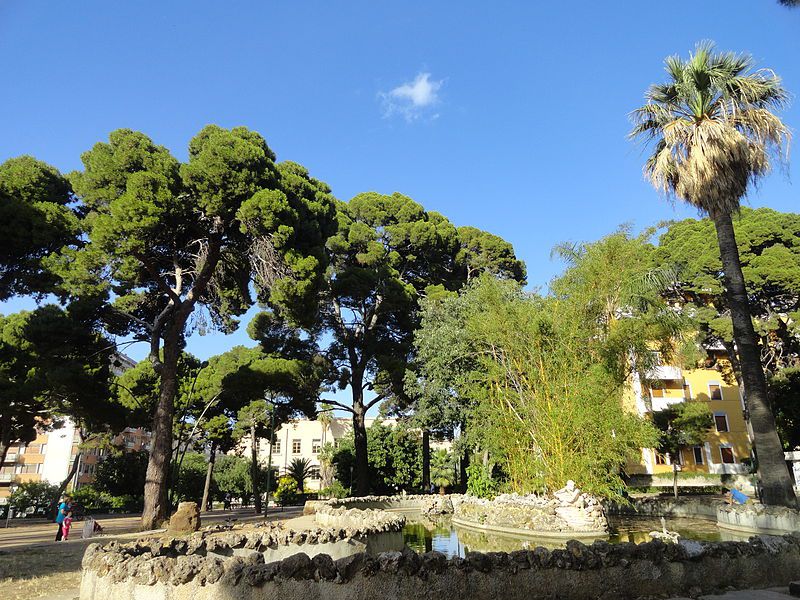 Statues, busts, and sculptures of noble people are located throughout the park. The central objects of the garden are a large fountain, a temple of the Arab-Norman style and an artificial lake.

The Palazzo Chiaramonte-Steri is the oldest example of medieval Italian architecture. Its huge fortress walls were built in the 14th century for Count Manfredi Chiaramonte, representative of the richest noble family of Sicily. 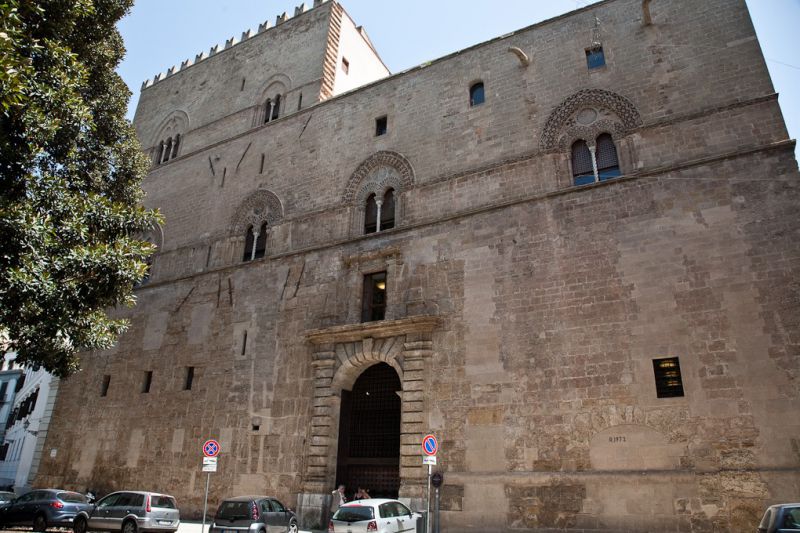 In the 17-18 centuries the castle served as a prison and the place of the meeting of the chief inquisitor of the island. Therefore, its walls are full of terrible and horrifying stories about human destinies. Today, part of the palazzo belongs to the University of Palermo, and other halls, such as museums, are open to visitors.

Another ancient architectural heritage and object of UNESCO in Palermo is the church San Nicola dei Greci, or La Martorana. This Arab-Norman sanctuary was built in the 12th century. Its Byzantine mosaics, preserved since the construction of the church are very popular. 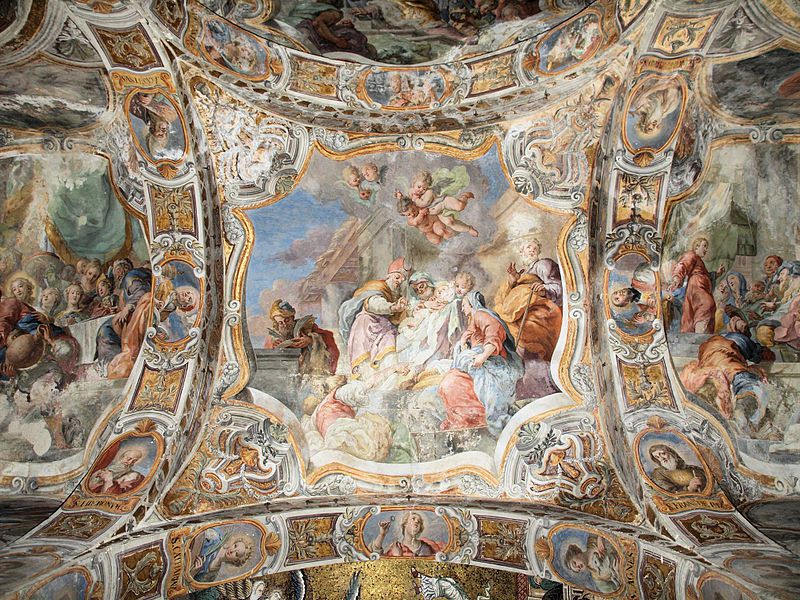 Millions of years ago, after the eruption of the volcano, a huge amount of lava rose to the surface, forming a dark island, which the ancients called "ustum" – burnt.

A small island that is rightly called the "black gem of the Mediterranean" is located a few hours ferry ride from Palermo. This is a real corner of the island nature, inimitable grottoes, caves and almost deserted beaches.

Ustica is a paradise for divers. There are many schools of scuba diving training on the island.

Created in the 17th century, the Regional Archaeological Museum Antonio Salinas holds a large number of artifacts from Western Sicily, from ancient times to the end of the Roman era. It houses one of the best collections of ancient Greek and Phoenician art. The main museum treasure is the excavation of the ancient city of Selinunte. The museum bears the name of the famous archaeologist Antonio Salinas, who served as its director from 1873 to 1914.

Initially, the old museum was built as a monastery, so it is interesting not only because of its exhibits, but with the building itself.

The old markets of Palermo cause no less excitement than its attractions. Many centuries have passed since the Saracens no longer rule Sicily, but their traditions still live in local markets. The local primitive atmosphere is difficult to describe in words, so it is better to include it in the list of places that are mandatory for visiting. 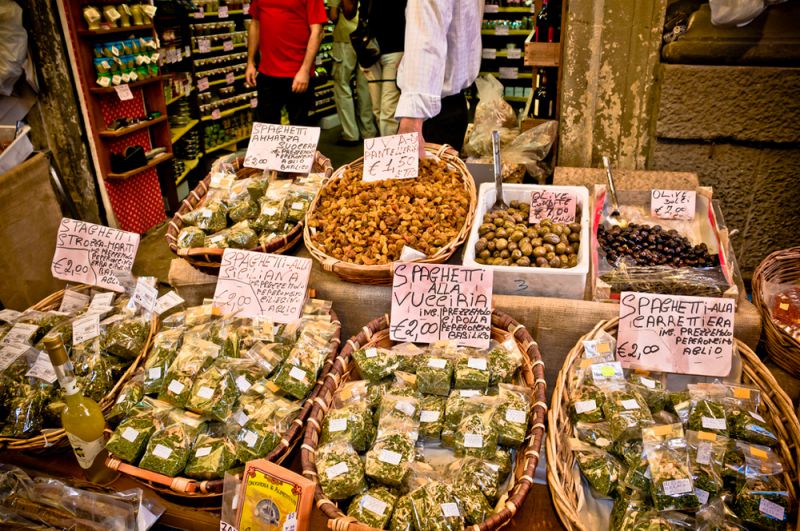 Narrow trading rows of Ballaro, Vucciria, Mercato di Capo and other market areas are filled to the rim with exotic goods, spicy flavors and overactive sellers. Tourists, hitting the market in Palermo for the first time, are simply lost in abundance.

This is not a complete list of famous sights of Palermo. You should visit this modest, but very rich corner of Italian culture. Thanks to the historical past, the image of the city and its inimitable color will leave a big mark in your heart.

Where to stay in Palermo

It will, of course, not be difficult to find accommodation in the capital of Sicily. More than 1800 hotels and apartments in Palermo – this is not the limit. Every year, there are more places for travelers to spend the night.

Prices for hotels increase in summer and during the holidays, of which there a lot of, in Sicily. On average, for example, in July in the center of Palermo you can find a room for 60 euros/day. The hostel will cost two times cheaper.

While choosing accommodation in Palermo, you can focus on the area of ​​Castellammare Vucciria. This is the center of the city, also the previously mentioned Vucciria market is situated here.