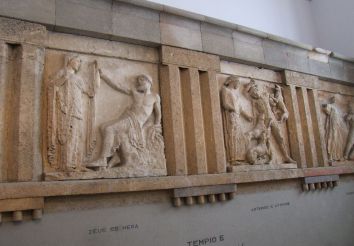 Archaeological Museum of Antonio Salinas is a regional archaeological museum in Palermo, which exposition holds private and university collections. It is located in a historical building, created in the late 16th century, in the central part of the city. In addition to the exposition, the rich history of the museum development attracts many tourists.

History of the museum building

Originally, the building of the modern Archaeological Museum named after Antonio Salinas was built as a monastery of the Fathers of the Congregation of St. Philip Neri. The author of the project was the Italian architect Antonio Muttone. Construction had started in the 16th century and was completed only in the late 17th century.

The complex consisted of the building of the monastery, as well as the church of St. Ignatius, the oratory of Philip Neri, the cells, the kitchen and many other rooms.

In 1866, Italy united in a single state, after which a law that stopped the activity of the Catholic orders was issued, and all their property was transferred to the state. The complex of buildings of the Congregation in Palermo was confiscated and given to accommodate the city museum.

History of the Archaeological Museum

The premises of the Congregation of St. Philip Neri were rebuilt according to the requirements of the new museum and in 1870 the museum had already received its first collection. A large number of local archaeologists, as well as numismatist Antonio Salinas, worked on the exposition. The collection was also replenished with donations.

During the Second World War museum director Jole Bovio Marconi took under his own responsibility the collection of the San Martino monastery, thereby saving it from destruction during the bombing and developing of the exhibit of the archaeological museum.

In 1949, Jole Bovio Marconi organizes a large reconstruction of the museum's collections.

The second large-scale reconstruction started in 2009. The museum opened its doors again for visitors in July 2016.

The collection of the Museum of Archeology in Palermo consists of several combined expositions, all of which were transferred to the museum in different periods: