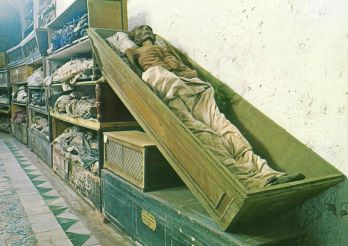 The Capuchin Catacombs of Palermo is the city’s special landmark that attracts thrill-seekers and those who want to see something really extraordinary. Capuchin City or Museum of the Dead is situated at the monastery of the same name, in the outskirts of Palermo.

History of the catacombs

The first Capuchins appeared on Sicily island back in 1534 where they settled in the western suburbian part of Palermo. At the time the local authorities gave them Santa Maria della Pace church. Later monks built a monastery near this construction with the money they collected from donations.

In 1565 the church underwent a major reconstruction that drastically changed both interior and exterior. The works were being performed for several decades due to certain reasons. First graves of monks that lived here were created in 1599. The monastery crypt was chosen to be the place of burial. Over time the tunnels needed to be expanded, that’s why a number of halls and underground passages were added.

Burial Capuchin catacombs is a crypt full of bodies of the deceased people with the total of 8000. Mummified corpses are placed in different poses here – they sit, stand, lie, some of them can be found in fancy coffins or wall recesses.

Every passed away monk was given a separate hall with own names, such as the corridor of men, woman, professionals, children, etc. The legend has it that the body of the famous Italian painter named Diego Velázquez is kept inside these catacombs.

The atmosphere here has a particular composition which has helped to prevent the bodies of the dead from decaying and to keep the clothing almost perfectly preserved.

One of the most fascinating exhibits in the crypt is a small coffin with a body of a girl named Rosalia Lombardo in it. She died in 1920, but her body was embalmed with the help of wonderful remedies. As a result, it preserved its original form and appearance till the present day.

You can get to the Capuchin Catacombs by walking down Corso Calatafimi street from Piazza Indipendenza to Piazza Cappuccini where the monastery can be found. Bus №327 will also be able to take you to this attraction.