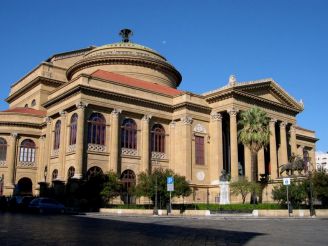 The Teatro Massimo can be translated from Italian as “the grandest” and carries king Victor Emmanuel’s II name. It is considered to be the largest theater in Europe.

History of the Teatro Massimo

In 1864 a competition for the best design of the new opera house was announced by Palermo mayor Antonio Starrabba di Rudini. The main goal was to create an elegant building that would serve as a decoration for the local architecture and improve Palermo’s image among other Italian cities. Giovan Battista Filippo Basile was the one who won in 1868 – he was a well-known artist who originated from Sicily. He started working on realizing the cherished dream.

The area where a convent and San Giuliano church used to be at the time was chosen as a place for construction. All the religious buildings were destroyed despite Franciscan nun protesting against it. The legend has it that the last prioress still wanders through the theater halls and those who do not believe in her existence always find themselves stumbling at the same stair step at the entrance. Later people started to refer to this very step as “Nun’s step”.

The first stone was laid on January 12, 1875. The construction was, however, accompanied by scandals, lack of financial support and a lengthy break from 1882 till 1890. When the architect passed away in 1891 his work was continued by his son Ernesto. The new theater welcomed the public only after 22 years since the beginning of the construction. The theater celebrated its opening on May 16, 1897, by holding a performance of Verdi's “Falstaff.”

The theater exterior was designed in the late Renaissance style. There is also a 5-level audience hall and upper balconies that can accommodate up to 1.4 thousand people. During all these years the theater had maestros such as Enrico Caruso, Renata Tebaldi, Giacomo Puccini, performing on its stage.

The style of the Massimo opera house is a combination of stern Neoclassical patterns and elements shared with ancient Greek temples. The main staircase is decorated with bronze lions carrying statues of women on their backs – allegoric “Tragedy” and “Opera.” And then there is also a dome-shaped as a semicircle on the top of the building. The theater takes up 450 square meters and looks like a horseshoe.

The opera house is situated in the historical center of Palermo, on Piazza Giuseppe Verdi. You can reach this place by any public transport that passes through the city center or simply by car.

Opening hours: guided tours are held here from 09:30 till 18:00. They are available in English, Italian, French, Spanish, and German.

Admission: the ticket for the tour costs 8 euros for adults, 5 euros for people under 25, 6 euros for groups that consist of at least 20 persons. Children under 6 are free of charge.