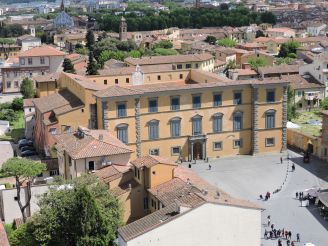 Archbishops Palace (Palazzo dell'Arcivescovado) in Pisa is one of the most beautiful buildings in the city. Often, tourists pay attention only to the famous tower, but in vain. Indeed, because of its significance for the clergy, the Palazzo is located in the center of the city. In the 10th century, the building for bishops was created on the ancient square, which was important both among the Etruscans and among the ancient Romans. It was replaced by a more beautiful building in 1178. And the palace that has lived till our days was built in the 15th century on the same place.

The architects were the brothers Francione and Baccio Pontelli. Initially, it was constructed in a beautiful Romanesque Florentine style. But during the restoration of the 17th century, the façade acquired a more fashionable at that time Neo-Renaissance style. This is what the visitor can observe nowadays.

Architecture of the palace

The façade of the building is quite simple and at the same time very beautiful. This is achieved by balancing the contrast between plaster and stone and marble inserts. In the courtyard there is a beautiful row of porticoes on the first floor, supported by marble columns. On balustrades there are also many small bas-reliefs and medallions made out of marble. It also houses a number of marble busts of the archbishops of Pisa.

The 18th century marble statue by Andrea Vaccà, depicting Moses stands in the center of the courtyard.

The palace is located in the historic center of Pisa, on Piazza Arcivescovado, 18. The Leaning Tower of Pisa and the Cathedral of Pisa are not far from it. In 300 meters there is a bus stop Del Parlascio (Linea 4 route).