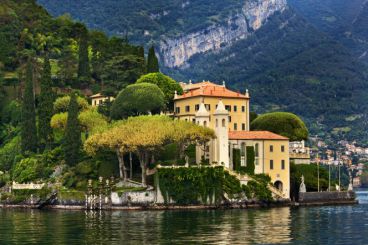 Villa del Balbianello, the queen of the villas of Lake Como, lies on top of the tiny wooded cape of Lavedo, near the ancient village of Lenno (Lombardy). The luxurious terraced gardens of the villa, beautiful architecture and wonderful views of the lake attract not only thousands of tourists, but also many couples, to have unusually colorful wedding ceremonies. The footage from the "Bond" and "Star Wars" movies were also filmed in this heavenly place.

The villa was built on the ruins of an ancient monastery in 1787 for Cardinal Angelo Maria Durini, a great patron of the arts. It became a frequent venue for the most exclusive intellectual and public gatherings of the time. The slogan: "Fay ce que voudras" (Do whatever you want) and now meets visitors coming up to the villa from the pier.

The next owner, Giuseppe Arconati Visconti, improved the garden and buildings, but in the 19th century, when the villa was owned by the Porro Lambertenghi family, it fell into decay. At the beginning of the 20th century, a wealthy American, Butler Ames, bought the neglected villa, restored it and turned it into a truly paradise-like corner.

In 1974, the Villa del Balbianello was acquired by Guido Monzino, a famous entrepreneur, collector and traveler, who led the first Italian expedition to Everest. He made the villa a haven for memories of his adventure life and bequeathed it to the FAI – the Italian Foundation for the Protection of the Environment and Monuments.

What to see in the villa

The whole complex of Balbianello consists of:

In the main building there is precious furniture of the 18th century. The interiors are decorated with many paintings on the glass and a rich collection of ancient ethnic sculptures and artifacts.

The top floor of the villa is dedicated to Guido Monzino, the last owner of the villa. There you can see many photos, maps, travel tools, flags and awards belonging to the famous Italian explorer, as well as the sleigh on which he reached the North Pole. The library holds a huge collection of books on geographic topics, about expeditions, mountaineering and travel.

Panoramic terraced garden – a real masterpiece of landscape art. To create it, every piece of land on the shore of the lake was used. There, boxwood, ficuses, laurels, cypresses and other trees grow. Blooming of modest snowdrops and luxurious wisteria, azaleas, magnolias, rhododendrons and cyclamen are a treat for the eye. If you're lucky, you can see how the gardeners are pruning trees using climbing equipment.

The most convenient way to get from Milan to the city of Como is by train. From Como to Lenno you can go by car or bus C10. From Lenno to the villa you need to go for about 25 minutes on a fairly steep road, or swim along the lake by boat – a water taxi.

Ticket price: only garden – 10 euro, garden and villa (with hourly sightseeing tour) – 20 euro. For people with disabilities and children under 4 – admission is free. For children from 4 to 14 years there is a 50% discount.