Archaeological Area and the Patriarchal Basilica of Aquileia, Aquileia 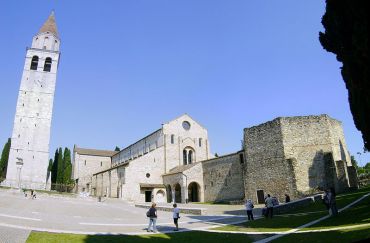 Aquileia is now a small municipality in Italy. And in the heyday of the Roman Empire it was a huge developed city. Today, archaeological excavations are conducted here, and numerous finds are exhibited in local museums. The Archaeological Area of Aquileia is of special interest to connoisseurs of history. The highlight of the city is the Patriarchal Basilica, which has beautiful painted floors. The whole complex has been a UNESCO World Heritage Site since 1998.

Aquileia was founded in 181 BC as the eastern stronghold of the empire. Soon it grew and became rich, thanks to trade routes. It was here that the main highway of Northern Italy – Via Aemilia – ended. Many sea routes from all over the world crossed here. The city was well fortified and held back the onslaught of neighboring tribes. In the 4th century, its population reached hundreds of thousands, then it was the fourth most important city in the Roman Empire. But, still, in 452, Aquileia fell and was destroyed by the famous Huns leader, Attila. In 568, its destruction was completed by the ancient Germanic tribes.

After these events, part of the population went to the east, and part to the west, and founded Venice. Despite the decline of the city, in the period 554-1751, it was the center of the Aquilean Patriarchate here. It was based on the territory of the temple, built in the 4th century, and then 2 times reconstructed. During this time, four Ecumenical councils were held here. Special creed was even adopted, slightly different from Nicene. Today excavations are carried out on a vast territory, but most of the once luxurious city is still underground.

The early Christian temple, built in the 4th century, was destroyed by the Huns, barbarian tribes and earthquakes. The present building, the magnificent Basilica di Santa Maria Assunta, was erected in 1031 by the decree of Patriarch Poppo. In 1379 the Basilica was rebuilt in the Gothic style.

From the bell tower of the temple (73 m high) you can see a stunning panoramic view. But the main thing for which the basilica is valued is its mosaic floors with an area of ​​about 700 square meters. They were created at the time of the building of the temple, then they were discovered only in 1909. Among the mosaic images there are scenes from the Old Testament, 4 seasons, fish as a symbol of Christianity, Jesus with the sheep as a symbol of the Good Shepherd. In the underground crypt of the church there are valuable frescoes of 9-12 centuries. Under the lawn surrounding the basilica, several underground excavations are located.

In a large-sized excavation area, several objects are now open for visiting. They are investigated and brought to a good condition. Of course, this is only a small part of the ancient city, but everyone will be pleased to see it.

The municipality of Aquileia is located in the east of Italy, in the province of Udine. The distance to Venice is 120 km, and to the nearest town Udine – only 40 km. The bus will be most convenient to use to get here. They leave from the bus station Udine, which is on Viale Europa Unita, 35/8. The journey takes about an hour. If you travel by car, from Venice you need to follow the road SS14, then in the town of Cervignano del Friuli you need to turn to SR352 and follow the signs to go to Aquileia.

Opening hours: the basilica is open to visitors –

Entrance: the cost of a full ticket for visiting all the premises of the basilica is 10 euros. Children under 10 years old admission is free.