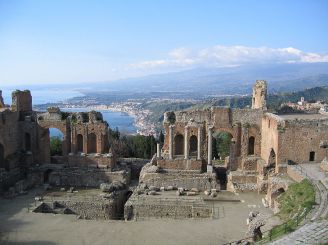 History of the Theater in Taormina

The theater in then still a Greek city of Taormina was cut down in the rocks by the Greeks in the 3rd century BC. Up to now, the building has been preserved mainly in stone, therefore it is assumed that at one time the theater underwent a significant reconstruction and was rebuilt on the foundation of the theater of the Greek period. But the plan and location correspond to the Greek traditions. So, in the 2nd century the diameter of the theater was 120 m. In the Roman era, gladiatorial fights were held in the theater.

Most of the seats, unfortunately, did not survive. But from the upper rows of the ancient construction a beautiful landscape opens – the bay of the Ionian Sea.

In the 19th century it was decided to restore the theater. The restoration was done by architects Maximilian Messmacher and Victor Kossov.

Today, the Greco-Roman theater became the symbol of Taormina. Residents of the city still use it for their intended purpose – they hold various film festivals, concerts, and plays here. The annual International Art Festival "Taormina Arte" deserved special status.

The ancient theater in Taormina is located near the coast of Isola Bella. You can reach the theater by public transport, which goes to the park Giardini. The road A18 is nearby.

The railway station in Taormina is considered very beautiful due to the preserved Sicilian decor. Many travelers recommend coming to this city by train. There are enough trains to Taormina, for example Espresso train, Eurostar.

There is an option to get there by bus: from Palermo, Catania (including the airport) and Messina. The trip is organized by Interbus.

Opening hours: the theater is open from 9:00 to 19:00. In winter the theater is open until 16:00. You need to pay for the entrance to the theater. Of course, it is better to travel in good weather, because the views here are incredible: on the one hand the Ionian Sea, on the other – the volcano Etna.