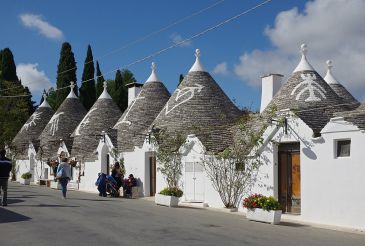 Trullo is the most famous landmark of Alberobello. This is how they call small white houses with a conical roof with a spire. They have very thick walls made of limestone, which helps to regulate the temperature inside the building. Another feature is that the buildings were erected without a strengthening mortar – only due to densely laid stones. Roofs were often painted with patterns and symbols, and the spire indicated the status of home owners and the level of skill of the builders. It is interesting that inside of the building, the ceiling has the shape of a dome. Trulli can have several roofs.

It is widely believed that the first trulli were built before our era. However, the earliest specimens that have been preserved to this days, date back to the late 17th century. Initially, these unusual buildings were used to store agricultural tools or as temporary shelters. However, later they were turned into a sophisticated way to evade taxes. The fact is that at the time when this territory belonged to the count Acquaviva, the tax was paid for each residential building. Thus, it was necessary to take measures to prevent Alberobello from being like the city.

Trulli are convenient in that they are very easily and quickly disassembled. In each building there is a special stone, when pulling out, the walls lose their support and crumble. Thus, before the arrival of tax inspectors, the apartment house instantly turned into a pile of cobblestones. This function remained valid until 1797, when Alberobello received the status of the city.

Trulli can be found throughout Alberobello in considerable numbers. They hide even between the usual modern buildings. But most of all they are concentrated in such areas:

Unusual buildings are used not only as housing, but also as premises for various institutions. Some of them deserve particular attention:

Since Alberobello is located in the province of Bari, it is most convenient to get there from the provincial capital of the same name. From the central train station of Bari, there are direct trains to Alberobello. They depart about once an hour, and the journey will take about 1.5 hours. You can also take a bus.