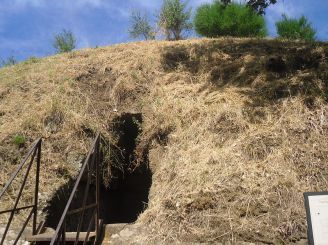 Etruscan Necropolises of Cerveteri (Necropoli etrusche di Cerveteri) is the ancient tombs meant for Etruscan aristocratic families; the last ones were built during the 3rd and 2nd century BC. Archaeologists and fans of antiquities find these large areas with plenty of underground graves to be especially interesting. Just like the Monterozzi necropolis, they were listed as a World Heritage Site by UNESCO in 2004.

Etruscans that had many city-states ruled on the Italian Peninsula long before Roman Empire came into existence. Caere, known today as Cerveteri, was one of those city-states. This ancient nation was remarkably advanced. However, it went extinct at the hands of Romans. None of the cities have survived to this day. People of this nation believed that after passing away human beings traveled to another dimension, that’s why deceased were equipped with personal belongings. Dwelling interiors were precisely recreated in the tombs as well.

Etruscans used to build necropolises that were designed the same way as their cities: identical houses, streets, squares. The excavation of the largest necropolis – Banditaccia – began in 1911. As reported by archaeologists the first burials date back to the 9th century BC. Two centuries later the necropolis was expanded in accordance with a well-defined urban development plan.

Tourists are allowed to visit only some of the ancient tombs, the majority of artifacts are kept in museums of Rome and Vatican City as well as in the Louvre. Cerveteri’s archaeological zone includes ancient town called Caere and Banditaccia, Monte Abatone, Sorbo necropolises. Moreover, an archaeological museum can be found in the historical part of the town.

Cerveteri town is located 40 km north-west of Rome. The most convenient to reach this place is by Cotral bus. It stops in Rome at Cornelia subway station every hour. The ride takes just under an hour and costs 3,5 Euros. You can travel back to the city by taking any of the buses in town’s center, at the archaeological museum. You can get to Banditaccia necropolis on foot (takes around 15 minutes). If you have a car, then drive along Autostrada A12 and follow the roadsigns.

Opening hours: Banditaccia necropolis opens at 8:30 and closes an hour before the sundown. It welcomes visitors daily, except for Monday, January 1 and December 25.