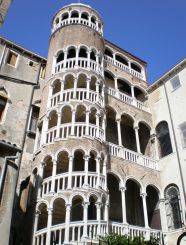 Contarini del Bovolo is an unusual Venetian palace, which previously belonged to the aristocratic family of Contarini. The building dates back to the end of the 15th century. It is located on a side street near Campo Manin, near the Rialto Bridge. The composition of the palace is not distinguished by special architectural delights, but its main gem is the spiral staircase that leads to the dome of the building, which offers a wonderful view of the panorama of Venice with its palaces, canals and roofs.

The famous family Contarini gave Venice eight doges. In the possession of the family, there are many chic palaces that are located on the banks of the Grand Canal. Among them stands Contarini del Bovolo, built according to the design of the famous Italian architect Giorgio Spavento. The staircase was created several years later, in 1499, by Giovanni Candi. Thanks to the new design, the palace became known as "The House of the Snail" among tourists and townspeople. The arch of a spiral staircase reminded people of this animal.

The Palazzo was built during the Renaissance and organically combined several architectural styles – elements of Byzantine architecture, Gothic architecture, and a unique Venetian style.

Originally the facade of the Palazzo Contarini del Bovolo was covered with many frescoes, the remains of which are still visible from the staircase. The composition of the palace is harmoniously complemented by old wells located in two inner yards.

The Palazzo Contarini del Bovolo is hidden from the eyes of the townspeople and tourists in the cunning plexus of the streets of Venice. It is located in the Saint Mark’s District, near the Rialto Bridge. It is called Corte dei Risi or Corte del Bovolo.

You can get here in several ways: