The Basilica of Saint Mary in Cosmedin or Santa Maria in Cosmedin Church (Santa Maria in Cosmedin) is an ancient church in the heart of Rome. It was built in the early Christian period. It is exceptional due to its original medieval interior and precious mosaics and frescoes. In addition, there is so-called Mouth of Truth here, attracting tourists with its mystery.

Ever since ancient times, this place was of great importance. After all, there was the Circus Maximus nearby, and the temple of Hercules was built near it in the 2nd century BC. Already in the 6th century, local priests began to use the ancient building for worship. In 782, Pope Adrian I decided to expand the church and destroyed one of the walls, doubling its length, and also created a crypt.

In the 9th century, the sacristy and oratorio appeared. At the same time the Greek monks were responsible for taking care of it. In 1084 the church was damaged during the pillaging of Rome, and in 1118 Pope Gelasius II ordered its restoration. In the 12th century, a bell tower was built and frescoes were created, and at the end of the 13th century, another repair work was carried out. In 1435, the church was given to Benedictine monks in order to be taken back in 1513. In 1535 the façade of the temple was redone and painted.

In the 17–18 centuries, the Basilica was reconstructed several times in the Baroque style. For the first time – in 1671, in 1684 vaulted ceilings were created, and in 1715-1716 the floor and pillars were repaired, and also the entrance to the crypt was opened. In 1718, on behalf of Cardinal Annibale Albani, architect Giuseppe Sardi created a Rococo façade. In 1762 a choir was built over the vestibule, and in 1830 an organ appeared in the church. In 1896-1899, the restoration has been carried out according to the new Romantic trends in architecture. And the last restoration dates back to 1962, when the roof of the nave and the bell tower were repaired.

Architecture and the Mouth of Truth

The façade of the church is made of red brick, it duplicates the internal structure with three naves. On the first floor, a series of arches and columns forms a portico, which serves as a narthex. The central arch is supported by two granite columns and creates a porch. Many inscriptions have been preserved on the façade, mostly indicating restoration work and other interventions. To the right, behind the central nave, there is a bell tower of the 12th century, its height is 34.2 meters. The oldest bell dates back to 1283. In the covered gallery of the narthex under the last right arch there is a beautiful funerary monument.

The Mouth of Truth is probably the most famous landmark of the church. It is located on the right side of the narthex. This is an old round slab of white marble, dating from the 1st century. Its diameter is 1.75 meters. It has an image of the mask of the ancient Greek deity Triton, son of Poseidon. Presumably, it was used for one of the Roman fountains, and it was placed in the church in 1623. In the Middle Ages, it was believed that Triton would bite the hand of a liar who would dare to stick it inside. A peculiar lie detector, isn't it? And even today, honest tourists strive to put their hand in the mouth of the mask. 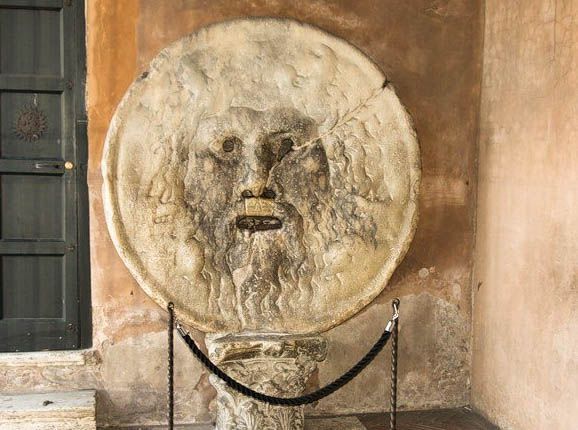 Inside the temple is divided into 3 naves by two rows of arches, which are supported by marble columns. Above the side aisles there are 6 windows on each side. The floor is made of an artificial mosaic in the Cosmatesque style. The walls of the central nave are decorated with frescoes of the 12th century. At the top they illustrate episodes from the Old Testament, and at the bottom of the New. Chapels and baptisteries are located in the side naves. The altar is made of white marble and red granite, it is separated from the choir with marble columns. The apse is decorated with 19th century frescoes that replicate the style of the 12th century.

Under the choir there is a passage to the crypt, where, even today, the relics of saints are kept in niches. Its ceiling is supported by columns, in front there is an altar. And the fragments of the precious 8th century mosaic are placed in the sacristy of the right side nave.