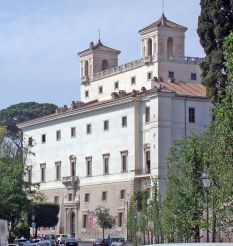 The Villa Medici is one of the most significant attractions in Rome that draws a lot of attention from tourists. Both guests and even locals are quite fond of it for its elegant interior designed in the Mannerist style, numerous antique ancient pieces placed all around the villa as well as its rich, fascinating history.

The mansion is located on the side of the grand Pincian Hill, near the legendary Borghese gardens. In 1576 the area came to ownership of Ferdinando de' Medici, a noble Roman cardinal after whom the villa was named. It was that very man who ordered one of the most talented and prominent architects – Bartolomeo Ammanati – to design and construct the building. He created the mansion and filled it with the spirit of Mannerism (a popular style of the 16th–17th century). However, it doesn’t end there. When Cardinal passed away, the Villa Medici was given to the house of Lorraine. After that Napoleon Bonaparte passed the property to the French Academy at Rome and since then it had been Roman noblemen’s residence.

The Villa Medici is shrouded in numerous legends. A tragic story describing the death of a great and ambitious Roman woman named Messalina is one of them.

The legend tells about the marriage of Claudius, the Roman Emperor, and his third wife Messalina that led a pretty dissolute lifestyle and wasn’t loyal to her man. Once she dared to plot a conspiracy against her husband while he was away in order to seize power over the empire with her tender yet strong hands. Messalina talked her lover into divorcing his wife so that she could marry Gaius Silius and make him the emperor.

Her husband discovered about the plans, however. He hesitated and could decide on what to do for a long time which is why one of his freedmen Narcissus ordered to capture the newly-married couple. Sitting locked up, she cried and suffered a lot. Her mother that didn’t like the dissipated behavior still spend the last moments of daughter’s life with her. When judgment time had come, mother suggested to die with dignity, but Messalina couldn’t commit suicide, so the dagger put an end to her life.

You can reach the Villa Medici pretty easily, it is situated near Piazza di Spagna, not far from Villa Borghese. You can also take the subway (the Spagna station, line A) or the bus № 117 (the Trinità dei Monti stop.)

Admission: full ticket costs 12 euros. Roma Pass holders, students and people over 60 can purchase a reduced one for 6 euros. Children under 10 are free of charge.