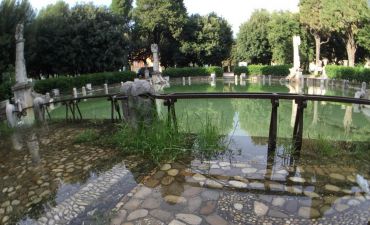 The fountain on the Mazzini Square in Rome was built between 1927 and 1930 by the design of Raffaele De Vico. For the construction he used such materials as: travertine, tuff, cement mortar, crushed stone. There is a fountain in the center of the square, in the public garden. It is a large rectangular basin, at the corners of which there are monumental columns with an eagle sculpture. Each column-fountain emits water from one bowl to another.

Around the pool there is a path with river engravings and multi-colored pebbles, thus making up a mosaic composition. On the outside of the columns four small fountains with drinking water are built.

In recent decades, due to the imprudence of the local administration, the fountain was in poor condition, stone details were damaged by vandals. Fortunately, by 2001 the fountain and its territory were completely cleaned and partially restored.

To get to the fountain on Piazza Mazzini, you can take the metro. The nearest station is called Lepanto, from there you will have to pass several blocks directly along Lepanto Street, which goes to Giuseppe Ferrari Street.