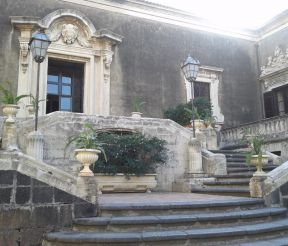 The Museum Biscari is located in the building of the palace of the same name, in the historical center of Catania. The collection includes natural exhibits and historical artifacts. The founder of the museum is considered to be the Duke of Biscari (today the city of Akate) Ignazio Paterno, however the first exhibits appeared before his reign. For the museum, a special building was built separately in the palace, where the museum was located til 1927, until most of the exhibits were transferred to the museum of the castle of Ursino.

History of the Museum Biscari

Construction of the Bisсari Palace was started in 1695, after the devastating earthquake of 1693. The first exhibits were collected by the third Duke of Biscari (the city was called until 1938) – Vincenzo, it was several sculptures, paintings and coins.

In 1751, the collection became considerably larger, then the Duke of Biscari decided to build a separate room for the museum. The author of the original project was the famous Italian architect Girolamo Palazzotto. Works were conducted in the period from 1752 to 1757 years.

In the new building the museum was inhabited in 1756, but the official opening took place in 1758 in the presence of the nobility of Catania. The museum's collection was filled with archaeological finds, commemorative medals, natural objects and much more. At the end of the 18th century the Museum of Biscari was a real pride of Catania.

In the period from 1764 to 1774 the museum's space was enlarged thanks to the work of the architect Francesco Battaglia.

At the end of the 18th century, the museum began to reorganize the exhibits, as well as their division into thematic exhibitions. The work was conducted by the abbot Domenico Seestini – librarian and curator of the museum, under the personal control of the duke.

The collection of the Museum Biscari had filled with exhibits for many years. Archaeological finds during excavations in Kamarin, Lentini, Catania and other cities of Sicily formed part of the museum's collection.

Most of the exhibits, Duke Ignazio Paterno acquired during his trips to Europe. In 1748, the authorities of the city of Catania gave the museum a large collection of marble statues, which for many years were exhibited in the inner courtyard of the palazzo.

Significant changes in the collection of the museum Biscari underwent in the 19 century, when a large collection of coins was stolen, and the exposition of weapons and armor was sold abroad.

In 1929 the descendants of Duke Ignazio Paterno donated most of the collection to the city of Catania. Then the collection was transferred to the museum of the castle Ursino, the grand opening of the exhibition took place on October 20, 1934 in the presence of King Vittorio Emanuele III.

Nowadays, you can enjoy only a small part of the exhibits, which are still stored in the walls of the museum Biscari in Catania.

The Biscari Museum is located in the historical part of Catania, close to the main attractions of the city. You can get there during your walk.The entrance is on Via Museo Biscari. Along the promenade passes Via Cardinale Dusmet, turn on Via Porticello.

In Palazzo Biscari you can also rent apartments.