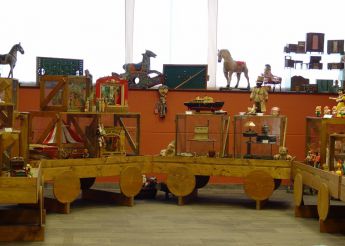 The Toy Museum in Catania is an exposition that will be interesting to both a child and an adult tourist. The museum is in the central part of the city, surrounded by major attractions, near the Cathedral Square. The museum was founded in 2002.

Collection of the Toy Museum in Catania

Originally, the museum's collection was located in the rich halls of the Brook Palace, in January 2011 the museum moved to the exhibition center Ciminiere.

The exposition is represented by a lot of exhibits, of the period from 1800 to the middle of the 20th century:

Originally, the exposition consisted of 180 exhibits, but in due course replenished with several dozen pieces as a result of private donations. All exhibits are in excellent condition. Thanks to such a variety of toys, it is easy to trace the history of the development of this craft over the past 150 years. The most valuable exhibits are stored in closed display cases.

The pearl of the collection is recognized the Dollhouse, executed in the Victorian style. It is divided into 6 rooms, each of which is equipped with furniture and interior items, including tapestries and lace bed linens, all strictly in accordance with the period.

In addition to visiting, the exposition of the Toy Museum offers master classes, shows, and games for children of different ages.

The museum is located in the central part of the city, it is easy to get here. From Piazza Papa Giovanni XXIII (next to the central station of Catania Stazione Catania Centrale) can be reached on foot, moving along Viale Africa.