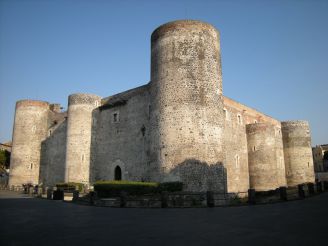 The Civic Museum of Catania – the local history museum of the city, is located in the walls of the castle Ursino, in the central part of the city. The museum has a rich history, and its exposition fully reveals the history and richness of Sicily. Here you will see the archaeological collection of Biscari, collections of coins, vases, sculptures, also paintings of artists of the 15–19 centuries.

History of the Museum of Catania

At the beginning of the 20th century, in the city was closed the Museum Biscari, one of the largest museums in Europe, which possessed the richest collection. In connection with this and other reasons, it was decided to open a new museum in the city. The grand opening took place on October 20, 1934. For the location of the museum, the building of the castle Ursino was chosen – a unique monument to Catania, as its squares made it convenient to arrange all the exhibits.

The exposition included artifacts that were acquired by the heirs of Prince Biscari – Ignazio Paterno, the Asmundo family collection, and also many private donations. The museum consisted of three large collections – archaeological finds, objects of the Middle Ages, Renaissance and modernity. However, later the museum was closed, and due to lack of funds, it did not work for many years.

In 1995, the art gallery resumed its activity, in which works of artists such as Luca Giordano, Guglielmo Borremans, Giulio Cesare Procaccini and the school of Jusepe de Ribera were presented. Today, the collection of the picture gallery is constantly growing.

The museum was reopened (first floor) in 1999. The collection covers exhibits of Greek and Roman times. Special attention deserves a rich collection of sculptures, in particular:

Also are popular decorative fragments of ornaments of buildings, theaters and other objects of the city.

The portals of the 13th and 15th centuries are of interest. The 15th century portal is located in the courtyard of the museum and is a unique historical monument. Previously, he was located in a local prison, where engraved poems, drawings and records of prisoners preserved.

Also presented is the richest collection of numismatics, where unique coins of the Greek and Roman period are collected.

In the collection of ancient Greek artifacts – a vase depicting Perseus and many others.

The Civic Museum is located in the central part of Catania, in the building of the fortress Ursino. You can get here when you walk around the city. The castle is near the Piazza Federico di Svevia. On the side of the railway station of Catania,walk for about 25 minutes, passing from one street to another. There is no direct public transport from the station to the castle.