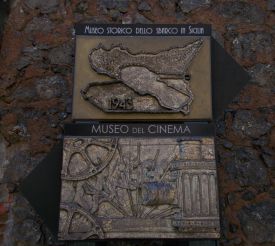 It was no accident that the cinema museum was opened in Catania, as the history of the city is closely connected with this art. For 15 years at the beginning of the 20th century the city was a real home for several film production companies. The museum is located in the central part of the city, on the embankment, near the main exhibition centers of Catania.

History of the Museum of Cinema

The grand opening of the museum took place on May 16, 2003. The exposition is located in the walls of the cultural and exhibition center Le Ciminiere. The collection occupies two floors, the total area of ​​the exposition is 120 square meters.

The Museum of Cinema gathered exhibits related to the art of the cinematography, the technique of its creation, and also its history. Particular attention is paid to the relationship between the cinema and Sicily itself. The museum presents an overview of the inventions of the cinema, its technical development and style.

The exposition is divided into several thematic exhibitions:

The Cinema Museum is located in the central part of Catania, on the Rocco Chinnici square, on the shores of the Ionian Sea. The exhibition center, which houses the museum, is 7 minutes' walk away from Catania Central Station.