Sardinia, a magical island in the Mediterranean Sea between Sicily and Corsica, is literally full of interesting places. Mountain valleys with snow-white tops on the island, turquoise water on the beaches, prehistoric nuraghi, necropolises, amphitheatres, museums, thermal springs, romantic architecture... all of this is mixed with bright holidays and delicious local cuisine. In general, the sights of Sardinia will satisfy the desires of the most demanding tourists.

The history of Sardinia and its ancient tribes begins with the Neolithic period. No wonder that now the island has so many interesting and unusual sights.

Let's start with the nuraghi – unique towers, about the purpose of which scientists argue until now. They were created by the ancient Nuragic civilization. These 10 – 20-meter structures are made of huge stones, without the use of gluing materials. The most intriguing thing is that the nuraghi do not have a foundation, and they stand only due to the mass and texture of the stones. The island has 7 – 8 thousand of these towers, but the most interesting is the Nuraghe Valley – the Su Nuraksy complex, not far from Barumini, which is a UNESCO World Heritage Site. 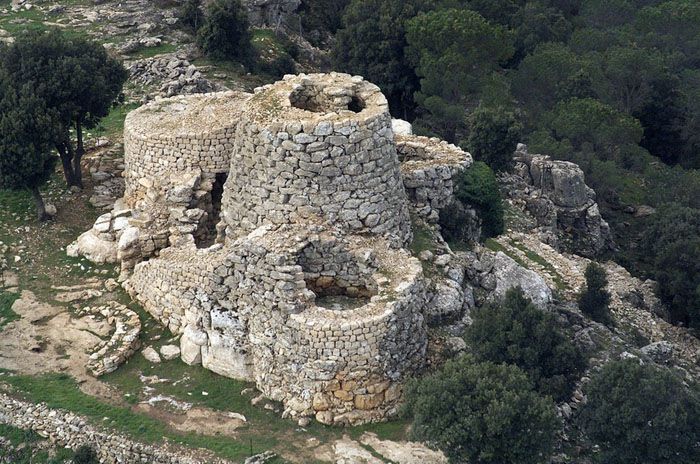 Many other nuraghi can be found in the "Strongholds of Sardinia" section.

How to get there: if you do not have a car it's better to take a tour to Su Nuraksy. From Alghero the road by car will take about 3 hours. But there are other nuraghi, much closer to this city. For example, Santu Antine in the town of Torralba. Santu Antine is a three-story and three-tower "king" of nuraghi, as well as the remains of an ancient village and a museum.

Necropolises in Sardinia will also be interesting for the lovers of antiquity. For example, carved in the rock necropolis of Sant’Andrea Priu in Bonorva dating back to the 3500th century BC. In the Middle Ages, they served as a shelter for Christian monks. This is one of the largest tombs of the Mediterranean basin.

The necropolis of Sant’Andrea Priu is situated in the Southern part of the Saint Lucia in the commune of Bonorva.

Tombs of the Giants

Do not forget to inspect the Tombs of the Giants – huge graves of 1,000 BC. There are about 300 of them on the whole island. The tombs have a specific architecture, thanks to which locals have given them their name. Some tombs are rather modest, others are more impressive. Many guides recommend visiting: 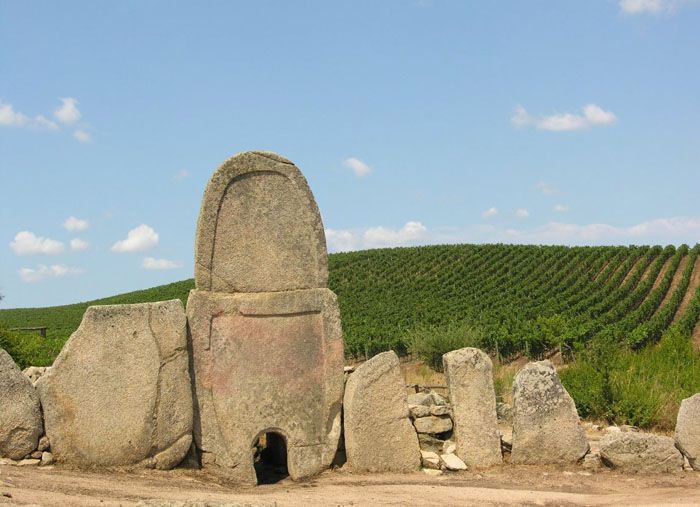 And, of course, the ruins of the ancient city of Nora, the first city of Sardinia (not far from Pula), now half submerged in the domain of Neptune. This settlement, founded by the Phoenicians, will allow you to fully plunge into the past. The roads laid out by the stone, the ruins of houses, mosaics, columns and stelae, the remains of the theater, fountains and pools. Welcome to history!

How to get there: the Nora ruins are almost at the extreme Southern point of Sardinia. The nearest big city is Cagliari. From there, ARST buses run to the town of Pula. There is also a stop in the port of Cagliari. Arriving in Pula, you will need to walk 30 minutes to the ruins, although you can take a special bus.

Sights of Cagliari – the capital

Having given due to the very old gray antiquity, we will move to the modern life of the paradise island.

First we will visit the current capital of our hero – Cagliari. This not a very large city (population reaches less than 200 thousand people) and it is able to occupy the tourist for more than one day. 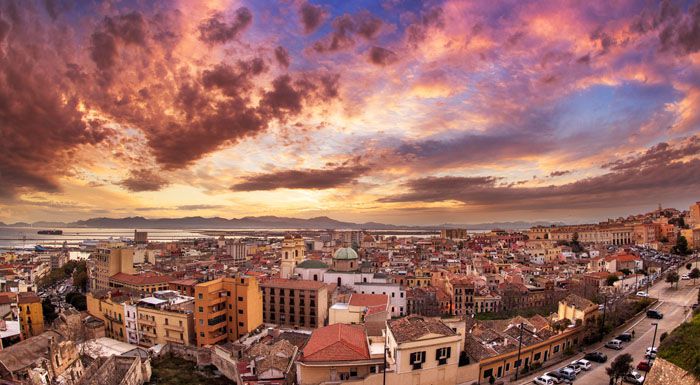 The main part of Cagliari's attractions is, quite logically, in the old town: 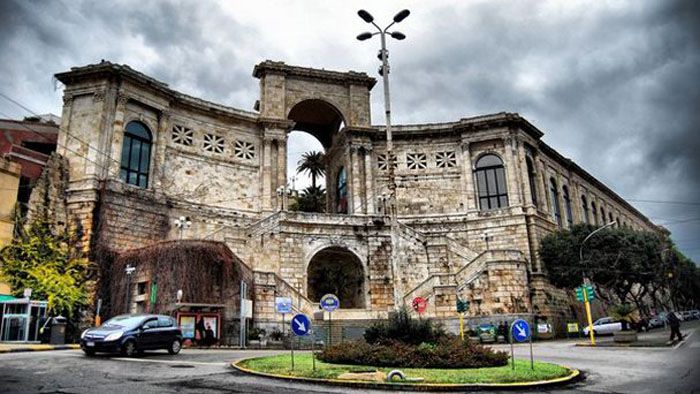 The choice of hotels in Cagliari is as varied as the sights.

Cities of Sardinia and their attractions

The capital of Sardinia, Cagliari is not the only settlement that can please a tourist.

Let us speak about port Olbia, which until the 20th century bore the name of Terranova Pausania. Here you will see: 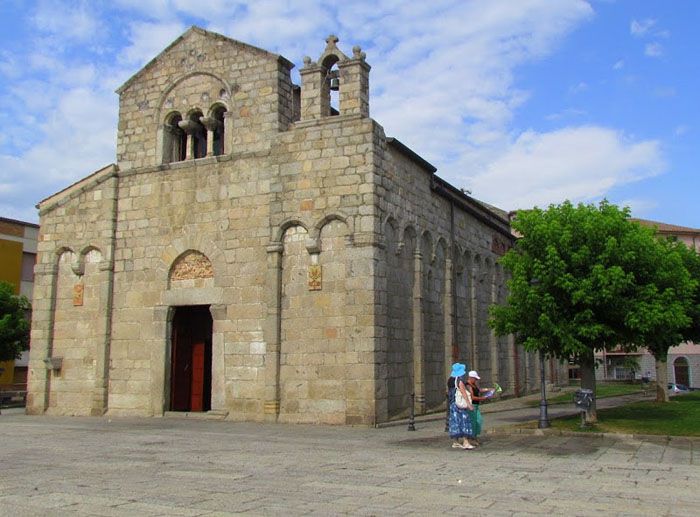 By the way, while choosing which of Olbia's attractions to visit, take care of a place to stay in this beautiful city.

Sassari is literally filled with temples and churches, the most prominent of which are: 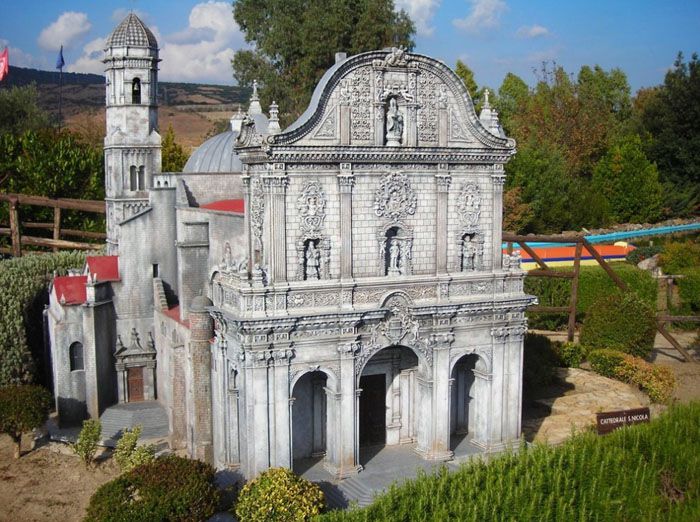 Among the attractions of Sassari there is the National Museum of Sanna with a chic collection of items from the Nuragic era. And also a bunch of palaces and the oldest university in Sardinia.

Hotels in Sassari will greet you with their hospitality and coziness.

Do not miss the medieval town of Castelsardo, located in 25 km from Sassari. 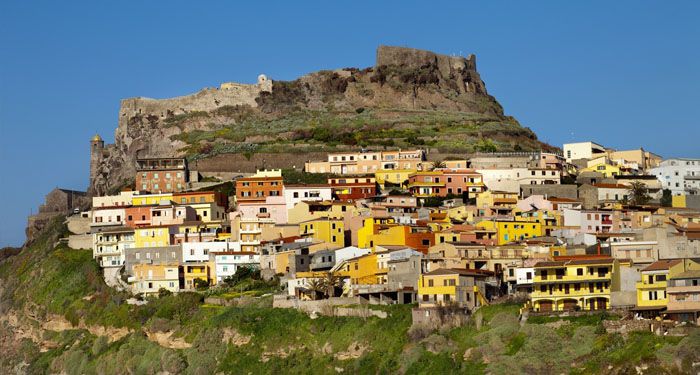 You will hardly find such concentration of memorials and buildings of the Dark Ages era in a much larger and more popular settlements. And of course, Capo Caccia, 45 km away, with its lighthouse, looking proudly at mortals almost from heaven (186 meters above the sea level), and visible from a distance of more than 30 miles. Today, the entire coastal territory of the cape has become a marine reserve. 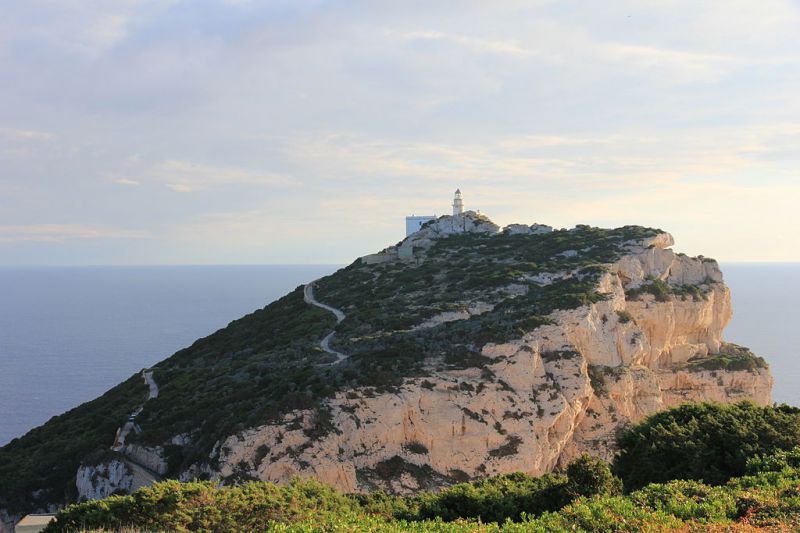 We cannot fail to mention Nuoro and its attractions: 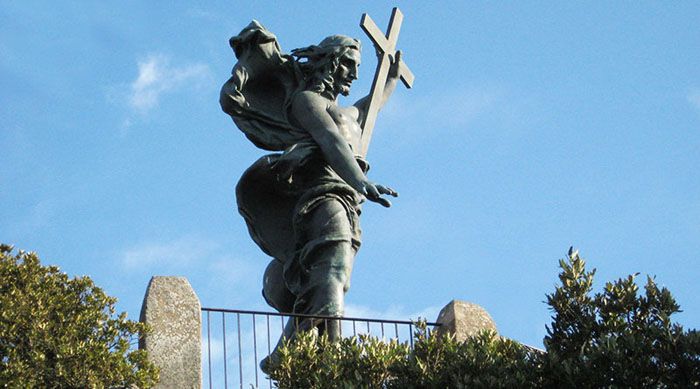 Oristano is a city located "between the sea and ponds", famous for: 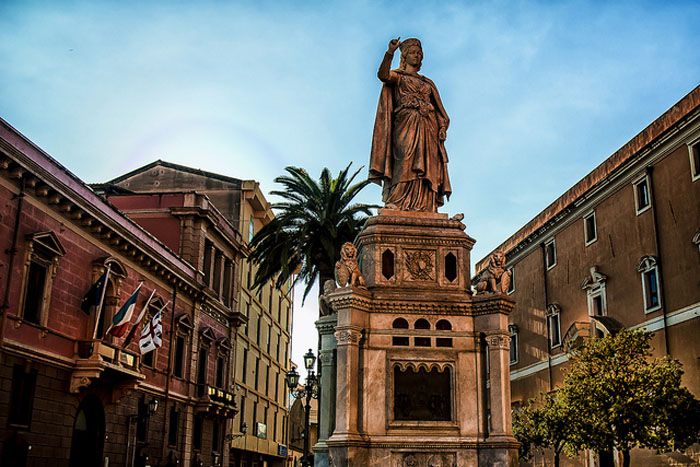 Do not forget to visit the settlements near the city, in particular Cabras, with the fort San Giovanni di Sinis, and the remnants of the Phoenician city of Tarros.

Or... Yes, virtually every second settlement in Sardinia, or even every first, can make you forget about everything in the world, even for few days.

By the way, hotels in Oristano can be found here.

Now let's talk about the miraculous charms of magical Sardinia. They, as you can guess, are also in abundance.

The grotto of Neptune is the second gem of the already familiar to us Capo Caccia. The most famous cave of the island, according to legend, became a grave for fishermen, who were looking for treasures here. The jealous lord of the seas did not release the ill-fated treasure hunters from the grotto, at the same time once again glorifying his name in the centuries (indeed, we will not call such beauty a grotto of the untimely dead fishermen).

You can get here in two ways. Free of fee but slow – through the 659 steps of stairs. Fast but for the money – by the sea for 15 euros. 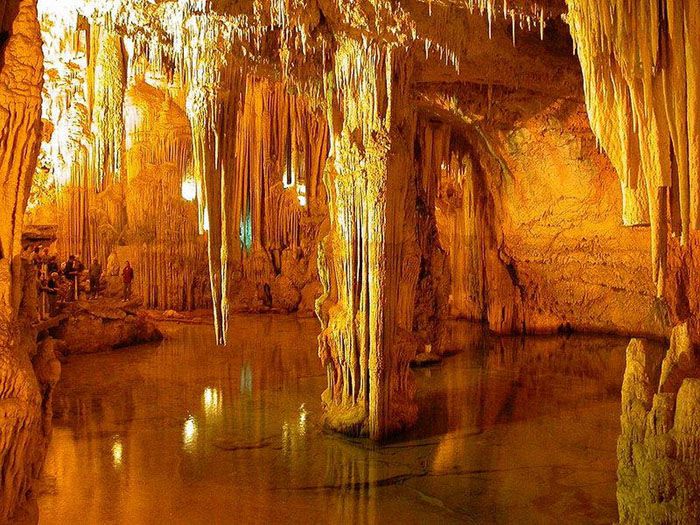 But no matter how you get here – it is worth it. Charming stalagmites. 9-meter underground salt lake – Lago Lamarmora. And even the underwater Nereo cave, the largest in the Mediterranean, dedicated to Nereus, the father of marine nymphs. Half a dozen rooms, among which is one with an 18-meter column. 2.5 kilometers of underground beauty. However, not all are open to visiting.

Cape Capo Testa (North of Sardinia) and the Moon Valley

Capo Testa is one of the few remaining corners of the planet’s untouched nature. Seven bays, surrounded by granite rocks, taking the form of a variety of fantastic (and not very) creatures (the wind and rain made sure of it). An out-of-this-world sight. 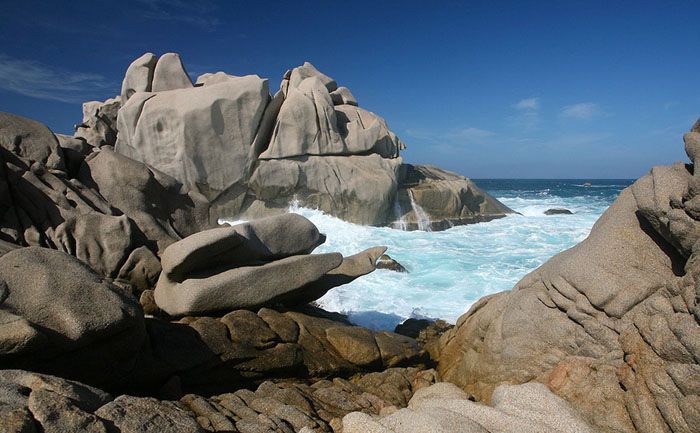 "Archipelago di La Maddalena" is the first nature reserve created in Sardinia (ferry goes here from Palau) – the promised land for wildlife fans. In particular, it is possible to see the inhabitants of the international whale reserve. It is one of the most interesting places among the natural attractions of Sardinia. 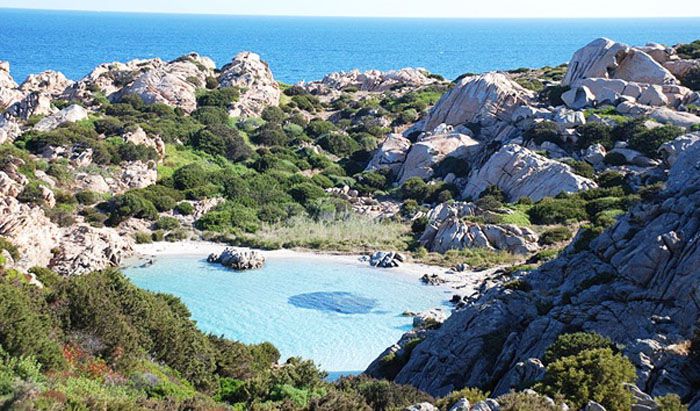 Parco Naturale Molentargius is a nature reserve with a territory of more than one and a half thousand hectares, where a lot of rare animals live, especially birds, in particular representatives of the "red folk" – magical pink flamingos. 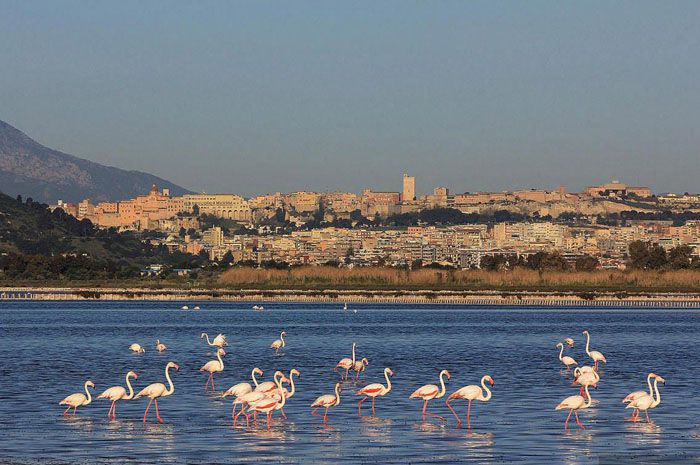 Another "bird's paradise" of the protected lagoon-lake Cabras with an area of ​​2200 hectares and Sale Porcus.

The green forests of Montiferru (nearby Oristano) are one of the oldest in Europe, overflowing with everlasting trees and legends. It is not recommended to wander alone here, it is better to use the services of a guide. Because you never know what might happen. 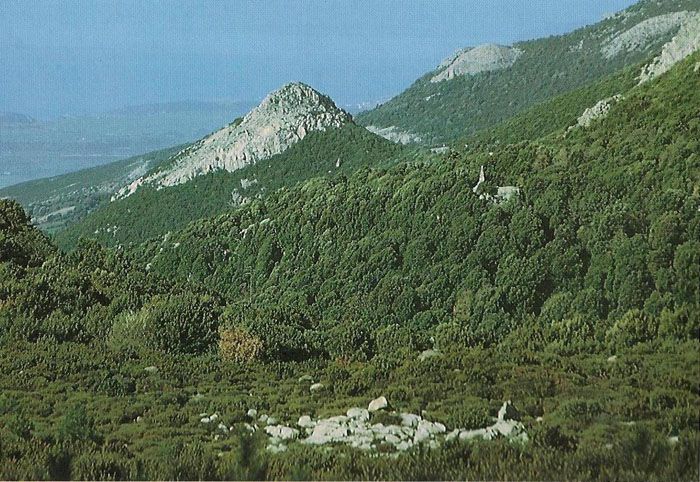 The Asinara National Park includes the island of Asinara itself and the coastal waters. It is rich in Mediterranean flora (678 species), mostly shrubs, and the fauna does not disappoint – more than 80 species of wild animals. And, undoubtedly, the one species that gave the name to the island ("asino" from Italian translates as "donkey"). 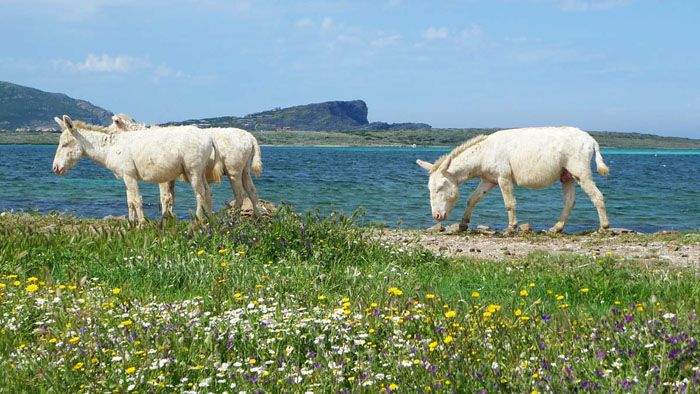 And, of course, the beaches of Sardinia, because of which the island is famous, along with its architectural or other natural wonders. They need a separate, detailed article.

Some sources call the whole Sardinia one great attraction. And the more I read about this Mediterranean island, the more I am convinced that they are probably right.

19 most beautiful fountains in Rome