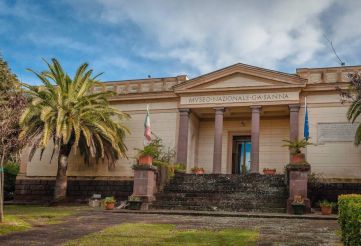 National Museum “Giovanni Antonio Sanna” is the main attraction of Sassari, the second largest city of Sardinia. The museum was constructed in the 1870s, but Italian senator Giovanni Antonio Sanna, who donated own collection to the facility, had given a new impetus to its development in 1930s. The Sanna Museum enjoys exhibits from the paleolithic era and down to the middle ages. Collections of paintings and other artworks of national artists can be found here as well.

Exhibitions of the Sanna Museum

Sassari’s Sanna Museum is known for its archaeological collections, whose exhibits are put on display in seven halls and tell about a few historical periods, namely:

In 2000 a new pavilion for contemporary art exhibitions was opened.

Besides the archaeological pieces, the National Museum “Giovanni Antonio Sanna” possesses art collection with its paintings of European and Italian artists from Renaissance and up to 20th century. Religious habits, furniture, tableware, fancyworks, ivory crucifix, silver articles and a throne of the Rococo style can also be found inside.

You can get to the museum if you take buses №702 or №706 to the Corso R. Margherita stop.

Opening hours: from 9 a.m. till 2 p.m. The museum is closed on Mondays.