Church of St Louis of the French, Rome 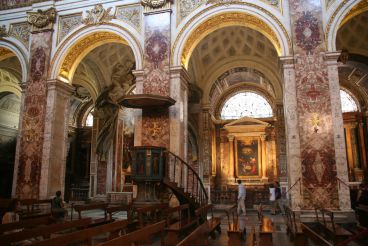 San Luigi dei Francesi is the Church of St Louis of the French located in Rome, not very far from Piazza Navona, basically in the centre of the city. This Roman Catholic church is a sumptuous Baroque temple. Its name is pretty self-explanatory – this building is dedicated to Louis IX, King of France. The church is situated near the Pantheon and other city landmarks, such as Palazzo Madama, Basilica of Sant'Agostino, the Church of Saint Mary Magdalene and numerous Roman museums.

The church was being constructed during 1518–1589 by French architect Domenico Fontana using Giacomo della Porta’s design by order of Cardinal Giulio de Medici. The place was supposed to belong to its Cardinal and French community that resided in Rome. Catherine de' Medici, queen of France, her husband Henry II provided funding for the construction. Previously owned by Medici family Santa Maria Church occupied this spot. The Church of St. Louis of the French is considered to be the second French shrine in Rome.

Exhibits displayed in the church:

The marble front side is embellished with statues of saints. Many French and Italian painters took part in enriching the interior of the sanctuary. This church also has one of the best-decorated ceilings in Rome. San Luigi dei Francesi can be without a doubt called a gem of Baroque art.

Rome boasts a well-developed road interchange. You can catch buses № 30, 70, 81, 87, 130F, 492, 628, N6, N7 near the Church of St. Louis of the French, Senato is the bus stop you should be looking for. The nearest subway stations are Spagna and Barberini. However, they are still pretty far away from here.