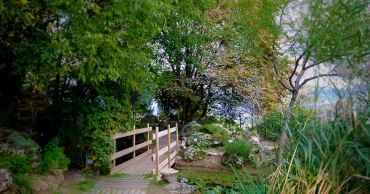 In the Upper Bergamo, far from the city bustle, noise and transport there is the Orto Botanico "Lorenzo Rota". Its territory is 2400 m². Here hundreds of species of the most incredible plants are waiting to meet with curious visitors. In addition, the garden staff is engaged in the restoration of endangered species. The main task of this place is to bring the public closer to the world of plants and foster respect for nature. Also various exhibitions are often held in the garden.

History of the park

The botanical garden "Lorenzo Rota" has been in operation since 1972. It received its name in honor of the doctor and botanist Lorenzo Rota. It was he who was the first scientist to describe and classify the flora of Bergamo.

Since 1989, the Botanical Garden has been an integral part of the Museum of Natural Sciences. And only since 2004 has become an independent division.

The garden was created as alpine, but over time the number of plant species increased significantly. Now here you can find flora, characteristic not only for the mountainous area.

Collections of the park

The Orto Botanico "Lorenzo Rota" is noteworthy as a collection of living plants, as well as herbariums. Here you can find more than 900 plant species: from the Mediterranean to the unusual and exotic. Among other things, visitors can get acquainted with lotus, papyrus, Madagascar palm, sugar cane, various cacti and carnivorous plants.

An important part of the Botanical Garden is the exhibition hall and workshop Viscontea Hall (Sala Viscontea). Seminars, exhibitions and other events are organized by the garden staff in this building, which was created as far back as the 14th century.

As the garden is on a hill, it offers a stunning view of the Lower City and the Alps.

The herbarium, which was assembled by Lorenzo Rota himself in the middle of the 19th century, has survived. It consists of 10 thousand copies. Unfortunately, visitors cannot get acquainted with this herbarium, since only students studying botany are admitted to it.

From time to time, there are free guided tours for all visitors.

To get to the Orto Botanico "Lorenzo Rota" in Bergamo is possible only on foot. To do this, you have to overcome the long staircase leading to the hill of Colle Aperto, and consisting of 141 steps.