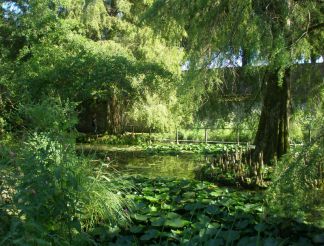 The botanical garden in Lucca (Orto Botanico di Lucca) is situated in Via del Giardino Botanico. It was founded in 1820 by the order of the Duchess Maria-Louise of Spain. The garden has beautiful flowers and venerable trees that offer their shade for rest. Orto Botanico di Lucca is almost triangular in shape and is divided into two main sections. One of them features an open garden, an arboretum and a pond. The other one has a greenhouse, a botanical school and a laboratory. The park became public in 1920 after it was handed over to the city council. In 2007, the Botanical Garden in Lucca was hailed as one of the best historical parks in Tuscany.

Must-see spots of the Botanical Garden of Lucca

More than 200 species of plants that can be found while walking along the alleys of the garden include, among others, azaleas, camellias, rhododendrons. The history of the park can be studied by ceramic "medallions" that tell of important events connected with this place. For example, the planting of Lebanese cedar in 1822 that grows in the garden up to this day. There are several other highlights that enchant visitors:

Equally unmissable is a pond with blooming water lilies. Children might be interested in watching huge carps and turtles luxuriating in the sun.

To see a gigantic tree, a taxodium, the roots of which peculiarly rise over the surface, head for a small island. Don't miss a saunter across wooden bridges and along paved paths.

Follow two spiral paths to climb a ferny hillock. It is possible to rent a bicycle to have a ride around the park's numerous sculptures, originally cut shrubs and many other attractions on sides of squiggly alleys.

In the garden, you can rent a bicycle. Climb the highest point of the ramparts to enjoy a wonderful vista.

The history of the Botanical Garden of Lucca is shrouded in mysteries. One of its legends has it that some noble person, Lucida Mansi by name, was very much inclined to carnal pleasures that eventually made her kill her husband so that he did not interfere. Her lovers did not meet a better destiny either: leaving her, they fell into a hatch full of sharp blades. One morning, Lucida found a wrinkle on her beautiful face and was horrified. Suddenly, a young man appeared before her and offered Lucida 30 years of beauty in exchange for her soul. Of course, it was the Devil.

Lucida agreed to his terms and lived the following years in luxury and pleasures but in the end, decided to fool the Devil. Having run up the steep steps of the clock-tower, she wanted to hold the clapper ready to ring the time of reckoning. However, Lucida managed to stop neither the bell nor the hands of a clock.

At midnight sharp, the Devil came to get her. He seated Lucida in a carriage engulfed in a fiery flame and took her out of the city walls. The horses drawing the carriage plunged into the waters of the lake of the Botanical Garden of Lucca. Even today, they say that if you put your head into the water you will see the face of Lucida Mansi.

The Botanical Garden in Lucca is located in Via del Giardino Botanico, 14. Nearby stops: