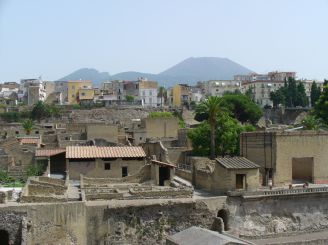 Herculaneum is a unique historical object and a tourist attraction of Italy. This is an ancient city, which was destroyed by the eruption of the volcano Vesuvius in 79 AD. Currently, the modern Italian city – Ercolano is situated in the part of the ancient city.

According to one of the legends, Herculaneum was founded by Hercules itself, but it is most likely that the settlement was founded by the ancient Italian people – the Osci, but later it came under the influence of the Greeks.

According to various sources it became the part of the Roman Empire in the period from 3 to 1 century BC. The population of Herculaneum was about 4000 inhabitants, and all of them were engaged in crafts and arts – they produced art objects for residents of other Italian cities. For Ancient Rome, Herculaneum served as a resort town located on the shore of the Gulf of Naples.

Herculaneum had the right of the self-governance and the status of the municipality.

History of the eruption

The fatal volcanic eruption of Vesuvius took place on 24 August, 79 AD. Then volcanic ash covered the city of Pompeii and Stabia very quickly. Herculaneum did not suffer, but most of the townspeople left the city in fear, which saved their lives. After midnight, Herculaneum was covered with a stream of hot lava. It buried everything – the streets, the houses, evenly filling all the empty spaces.

Thanks to this phenomenon, buildings, furniture, papyrus scrolls, and even food products – bread, wine, have survived to this day.

For the first time, the remains of the ancient city were discovered in the early 18th century, when a local resident Ambrogio Nucherino wanted to dig his well. Then the Duke Emmanuel Maurice de Lorraine organized the first archaeological excavations. The work had lasted for 9 months, it turned out that the townspeople discovered the remains of the ancient theater. During the period of work, 9 statues were taken from the ground.

The second excavations were organized in 1738 by the order of Charles III. The most valuable exhibits, which were discovered by archaeologists during this period, are presented in the Royal Palace in Portici.

During the excavations in 1750-1765, Villa dei Papyri was discovered. However, the search was stopped because of the abundant gas that went from the tunnel.

Until the 20th century it was assumed that during the tragedy people were not harmed, but in 1982 archaeologists discovered 250 skeletons in boat hellings.

At present, excavations have become difficult to conduct, as the modern Italian city is very close.

It is worth noting that during the first excavations most of the exhibits were damaged. Ancient works of art fell into private collections. Also, many exhibits were not considered to be art objects by the standards of that time.

Architecture of the ancient city

The architecture of ancient Herculaneum is dominated mainly by the Greek style. The buildings are decorated with many bright mosaics and frescoes, which depict humorous pictures. The most striking exhibits are shown in the collection of the Secret Cabinet in the Archaeological Museum of Naples. The city was divided into 8 quarters.

The most convenient way is to get to Herculaneum from Naples. For this you can use several types of public transport: