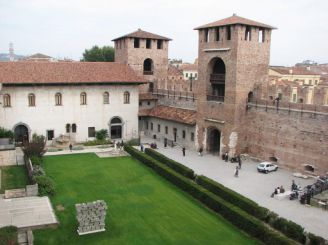 Castelvecchio Castle or the Old Castle is a fortified medieval structure in the center of Verona. Naturally, the purpose of the castle was the defense of the ruling family of Scaliger. For many centuries, it remained the most important fortification structure of the family. Nowadays, the Castelvecchio Museum is situated in a powerful and strict castle.

A church built in the 8th century was situated on the site of the castle. It was dedicated to Saint Martin. Due to this, the fortress was originally called Castello di San Martino in Aquaro. The first fortified structures appeared near the Adige River in 1298 by order of Alberto I della Scala. In 1354, his descendant, Cangrande II della Scala began construction of a castle and a bridge across the river near the city walls. They were to become the main defensive structures of Verona.

The construction was entrusted to a faithful condotier and architect, Guglielmo Bevilacqua. Construction was completed in 1376. In the 16th century, 2 new castles appeared in the city, thanks to which the defense structure achieved the perfect combination. Then the first building was named Old Castle.

In 1923–1926, a large-scale reconstruction took place. After it, the City Museum and Artillery School were placed here. The last restoration of the castle dates back to 1957.

Due to a number of interventions and rearrangements of the original structure the Scaliger castle in Verona looks as it is today. The three parts of the building are located at different heights and are separated by a large battlement built at the end of the 13th century. Stone, pebble, tuff were used as construction materials, but red brick and terracotta became the main one. The latter is very characteristic of all buildings of the medieval Verona. Parts of the castle differ from each other in structure and purpose:

Nowadays, there is a museum that preserves the rich cultural heritage of Verona inside the castle.

Admission: the price of a full ticket is 6 euros, with a discount  (14–30 and over 60 of age, groups of more than 20 people) – 4.5 euros. For children (8–13) as well as on the first Sunday of the month (from October to May) – 1 euro. For children under 8 – admission is free, as for visitors with a map of Verona. Data on the cost of admission and opening hours may vary.