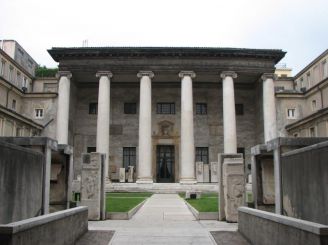 Museo Lapidario Maffeiano in Verona is a rich collection of funerary monuments. Items found during excavations in the region of Venice are stored here. The museum is one of the oldest in Europe among its kind. A separate building was built for the core of the museum. At the time of opening the exhibition was public, which was rare for the 18th century.

The core of the museum was created in 1612, when the Count Cesare Nichesola presented the Verona Philharmonic Theater with a portion of his collection of funerary epigraphs and tablets. A century later, in 1714, the art historian and nobleman, the Marquis Scipione Maffei, reorganized a small collection and in 1718 opened it to visitors. About 230 marble tablets were then mounted into the wall near the philharmonic building. The exhibition lasted in this appearance until 1727. In 1738, architect Alessandro Pompei began work on the museum building, creating a beautiful entrance with a magnificent portico with 6 columns. In 1745 the museum was open to visitors. In 1754, the founder retired, handing over the management to the antiquarian Jacopo Muselli.

During the Napoleonic occupation in 1797, the museum was plundered. Some of the exhibits were later returned, but some of them are kept in the Louvre. In 1882, the municipality bought the museum, and in 1927 it was somewhat reduced, transferring part of the exhibits to the Castelvecchio Museum. After the World War II, the museum was closed until 1965. There was a reconstruction of the building at that time. In 1982, with the efforts of the architect Arrigo Rudi, another restructuring was carried out, bringing the museum in line with modern requirements.

Nowadays, the museum collection includes more than 500 exhibits, among which there are epitaphs, stelae, funerary monuments and urns, reliefs, and much more. The history in stone, which the museum offers to the visitor, is divided into 4 parts, corresponding to different eras:

According to the architect’s plan, the courtyard was to become a beautiful garden. But over time, the green lawns in its center became surrounded by sarcophagi, road landmarks and other monuments from the times of ancient Rome. All of them were placed under a number of porticoes framing the first floor of the Philharmonic.