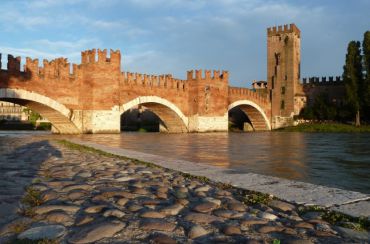 Castelvecchio Bridge in Verona (Ponte di Castelvecchio) is named after the dynasty ruling during its construction. It is as example of the medieval simplicity. One might even say, that it is uncouth. Its original function was to defend the castle and evacuate the family of the ruler. And at the time of creation, the bridge became a real miracle of military engineering, being the longest in the world.

Construction of the bridge began in 1354 by order of Cangrande II della Scala. Most historians are inclined to consider the architect Guglielmo Bevilacqua to be the author of the project. There are 2 legends are associated with him. It is said that after the construction was completed, the ruler presented the architect with a sword that previously belonged to a saint from France. The very same creator of the bridge appeared on its opening in 1356 on a horse. He did it so he could escape in case the autocrat of Verona would be angry. Actually, the bridge connected the banks of the Adige River near the Castelvecchio Castle, and in case of conquering the city by foes, it was a chance for the ruler to flee to the allies.

In 1802, French troops destroyed one of the towers of the bridge. Its restoration lasted from 1824 to 1834. And only in 1870, pedestrians were allowed to use the bridge again. On April 25, 1945, the retreating German troops blew up all the bridges of the city. In 1949, the restoration work began according to the original design. The opening of the bridge took place on July 20, 1951.

At the time of creation, the architect made a rather bold decision – all arches have different lengths, decreasing with distance from the castle. This was due to the characteristics and strength of the flow of the river in this bend. So,

The arches are supported by two powerful pentagonal pylons. The lower part of the arches and pylons is lined with white Istrian stone. The main part of the bridge is made of terracotta, typical of the medieval buildings of Verona.

The bridge is framed by high battlements on both sides. A restored tower stands on the right side of the bridge, near the castle. The right pylon is much larger than the left. It is decorated with 15 Corinthian capitals and fragments of marble bas-reliefs of the ancient Roman era.