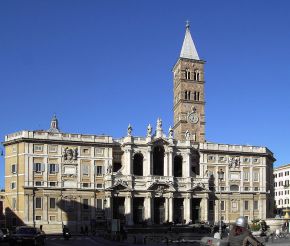 Basilica di Santa Maria Maggiore in Rome is a unique building dating back to the 4-5th century that allows you to immerse in the past. Bright mosaics, mottled arches, luxurious ceilings decorated with gold: all this will take you into the age of grace and wealth, in the age of Baroque. Consecrated by the Pope, Santa Maria Maggiore is one of the main basilicas of Rome. The temple is listed by the Pope as one of the seven pilgrimage churches of Rome and remains under his protection.

A captivating legend explains the origin of the church. Once, on a summer night when everyone was asleep, Pope Liberius, and, according to some sources, the prosperous Roman Giovani saw Madonna in their dreams telling them to start the construction of the temple at the place where the first snow would fall. And so it happened: the following day Esquiline (one of the seven hills of Rome) was covered with a snow-white blanket, which prompted the erection of the church.

Interior of the basilica

The interior of the basilica awes visitors with most beautiful mosaics that depict the events of the Old Testament, the birth of Christ and his life. Despite their venerable age (some of them date back to the 5th century), the mosaics' colours look strikingly bright.

Pay attention to a gilded wooden ceiling with special deepenings in it called caissons. The author of it is Giuliano da Sangallo.

Chapels of the Basilica of Santa Maria Maggiore

The basilica boasts three chapels that are particularly noteworthy:

1. Sistine Chapel (do not confuse with the Sistine Chapel in the Vatican). It is located on the right of the basilica. Sixtus V and Pius V found rest there. The inside of the chapel is adorned with paintings that tell the story of Christ and Moses.

2. The Paolina Chapel. One can enter it through the left nave of the Sistine Chapel. Clement VIII and Paul V are buried there. The chapel is named after its founder, Paul V, who was a member of the Borghese family. The highlight of the chapel is the original icon Salus Populi Romani purportedly painted by the apostle Luke.

3. Capella Sforza erected according to the design of the Italian architect Giacomo della Porta.

Santa Maria Maggiore in Rome is situated within walking distance of Termini Railway Station. You will need no more than 15 minutes to reach the temple on foot. The Termini metro station is located nearby.