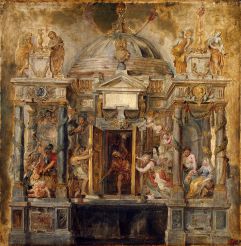 Temple of Janus, a two-faced God, dates back to ancient Roman times. It was located between the Curia Julia and the Basilica Aemilia. The temple was a small building with two gates that were open during wartime and closed during peacetime. Usually, peace didn’t last long, since the Empire engaged in many wars and fought back barbarian invasions. For the first time the temple was closed for 43 years during king Numa Pompilius’s peaceful reign, the second time the gates remained shut for a few days. Only high priest, who was also Emperor, had control over them. The image of this symbolic temple can be found on the ancient coins from the times when emperor Nero ruled.